More than a week ago, in the article called

Waiting for N heads in a row,

I asked you a simple question:

How many throws in average do you need to get N heads in a row?

I have also given you a solution that looked elegant, relatively to the mess that could have been found on the Internet. However, a reader contributed a much more compact and elegant solution based on a recurrence relation. 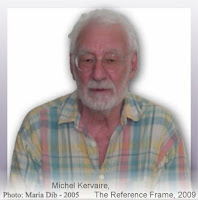 Tonight, I will give you a similar problem that may also be dissimilar - who knows. :-)

The only difference is that you won't find a full solution in this blog article - only the right answer. You must find the proof yourself. The problem is the following:

Find all possible dimensions of manifolds whose Kervaire invariant equals one (as opposed to zero which is the more usual value). If it is going to simplify your solution, I can also give you the answer. The dimensions are:

The last entry, 126, has not yet been settled. Well, bright readers may have noticed that the results are identical to the results of the coin problem. However, I suspect that quantum field theory and string theory will be more useful for you to find a compact solution than coins.

You may try to find some obstruction or an anomaly preventing you from constructing a particular field theory - e.g. a conformal field theory describing the stringy world sheet. Or you may find a partition sum receiving contributions from Kervaire-invariant-one manifolds only and show that only manifolds with the dimensions above contribute.


I don't know of a simple solution. In fact, I am not yet 100% familiar with the math problem itself. ;-) At any rate, the existing math solution is being compared to the cryptic proof of Fermat's Last Theorem - and those who have solved the Kervaire problem - namely Mike Hill, Doug Ravenel, and especially Michael Hopkins - are at least as ingenious as Andrew Wiles.

The existing solution is very fresh. It was presented on the same day when David Berenstein gave us the coin problem that happens to have the same answer :-) and it uses manifolds whose dimension is higher by one - i.e. 2^{N+1}-1. But that's the last relationship with holography in quantum gravity that I can fully guarantee at this moment. ;-)

Also, the first piecewise linear manifold without a differentiable structure that was found by Kervaire in 1960 using his invariant was 10-dimensional - which is the last link to the critical dimension of superstring theory that I am certain about. In fact, I still feel that all those (non-differentiable etc.) manifolds must be pathological enough to be excluded from path integrals in physics - but that's an example of "intuition" or "lore" that I have mostly absorbed but that can turn out to be wrong. See also

for more introductory information about the Kervaire invariant problem.

The fact that the Kervaire invariant is always zero unless the dimension equals the average number of throws for N heads in a row for an integer N ;-) (my language!) was already proved by William Browder in 1969. The existence of examples for dimensions 2, 6, 14, 30, 62 has been known since 1984 (Barratt, Jones, Mahowald).

On the other hand, the fact that the coin problem with more than 5 or 6 heads in a row has no relevance for the Kervaire-nontrivial manifolds (i.e. the absence of such manifolds above d=126) has only been known for weeks. Why can't you throw the coin more than six times? What about dice? :-)

Or what about embeddings of the manifolds into a nonlinear sigma model on the 248-dimensional E8 group manifold that could impose an upper bound? Isn't any reader as irritated as I am by the fact that the dimension of E8 is so close to a power of two, too? It equals 2^3(2^5-1).

Yes, I know that the octooctonionic projective plane is a coset of E8 (and that E8 has spinors besides the SO(16) adjoint) but that doesn't fully remove the mystery because even the whole E8 dimension, not just the coset, is so close to a power of two!

John Baez actually explains that a 256-periodicity of some generalized homotopy (replacing the mundane 8-periodic real K-theory) is used in the no-go proof (above 126) by Hopkins et al., much like the replacement of particles by strings.

See a paper by Jack Morava for a spirit of this stringy lift. Morava uses some work of my former co-author Postnikov - and probably also Čech cohomology. The only missing thing in a Morava paper about Čech cohomology is Slovakia homotopy - to get the rest of Czechoslovakia. :-)

Needless to say, I don't fully follow the story even though it shouldn't be that hard after seeing a paper, assuming our background. The more I look into it, the more I am ready to believe that this work is fundamental for a classification of all topologies - and for some deep mathematical depths of string theory, too.

But I am surely able and willing to wish you good luck, dear readers! ;-) Don't forget to answer the mysterious marginal case of 126 dimensions.
Luboš Motl v 8:12 PM
Share