Update: The murderer is Jabrai Jordan Copney (20 year old, a musician from New York) or one of his two companions. The reason were USD 1,000 and a pound of pot. Two female Harvard students were connected both with the victim and the killer(s).

Between 2001 and 2004, we would have a meal (as well as some creative exchanges of ideas, wine, and fun) with the Society of Fellows in the Eliot House thrice a week. You walk along the Dunster Street and the Kirkland House is on your right side. See the map of Harvard houses. 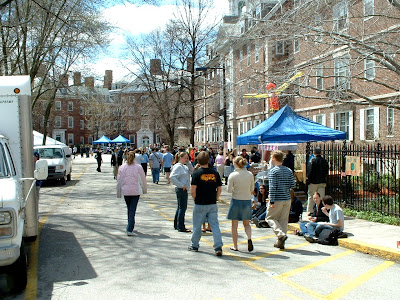 The picture above shows the Kirkland House on the right side while the Eliot House is on the left side. See also Street View at Google Maps (click the "x" to exit the Street View mode).

The house wasn't particularly important in my life. But because I took 200+ similar pictures of the area during the Springfest 2003 (you can have them if you really want them!) - and a comparable number of pictures in later years - the Kirkland House is actually the house that appears on the maximum number of photographs I have ever taken.


At least I am not able to find another house that would beat the Kirkland House.

So it feels somewhat strange to hear that Justin Cosby, a 21-year old black former and occasional student of Salem State College (and a tall angel who was arrested for drugs in 2007), was shot into his belly in the Kirkland's basement near the J-entrance to the Kirkland House yesterday and collapsed at Dunster Street, in the middle of the picture above. See Google News or a more detailed description by The Harvard Crimson. He died at Beth Israel Deaconess Medical Center in Boston today. Sad.

The identity of the killer remains a mystery. Not even Wolfram Alpha is sure what to do with the question. However, three people in baseball caps were seen running from the entry. Because of their sophisticated system of locks, some Harvard students were probably involved, at least indirectly.