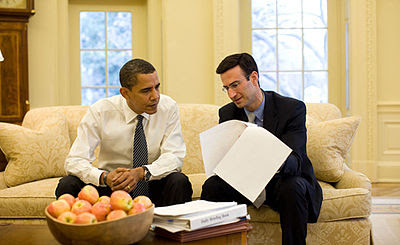 Barack Obama with Peter Orszag, the OMB boss, in the Oval Office.

When Barack Obama visited Prague and talked to Czech President Václav Klaus, Obama told his Czech counterpart that his environmental offices are filled with people who have no sense of economic reality when it comes to carbon regulation.


Later, President Klaus praised Obama for saying things that sounded like the music from the Heavens to Klaus's ears: it almost looked like Klaus was modestly feeling like the #2 denier in the Castle at that moment.

The Secretary of Music in the Heavens was Dr Satan, but that's another story. ;-)

We could have had some hopes or doubts - depending on your point of view - what Obama really believed about the costs and benefits of the CO2 regulation. These hopes or doubts are likely to grow. Why? Recall that the U.S. Supreme Court has declared carbon dioxide a pollutant in April 2007. What's happening with this crazy, toxic decision? A decision that the Environmental Protection Agency (EPA) has endorsed and interpreted as a reason to act? Last month, EPA decided that greenhouse gases threaten the public health and welfare.


Associated Press (II), ABC, and others,

an internal 2009 memo of the Office of Management and Budget (OMB) was just released. It is called

and it says things that all sane people realize to hold but the EPA doesn't.

The OMB is currently led by Peter Orszag, a Princeton economist who is a disciple of Joseph Stiglitz and Robert Rubin. The nine-page document compiled by many White House offices and leaked by the GOP Senators today says that


[T]he EPA regulation of the gases blamed for global warming will have serious economic consequences throughout the U.S. economy...

If the EPA proceeds with the regulation of heat-trapping gases, factories, small businesses and institutions would be subject to costly regulation...

The EPA failed to explain adequately how it determined that greenhouse gases endanger human health and welfare...

The last question is arguably the most skeptical one. Note that it is not only the EPA but also the Supreme Court that should try to explain the unexplainable.

In fact, later I learned that EPA's boss Lisa Jackson has already stated that she has just copied her statement from the Supreme Court so she can't be blamed for its being a bullshit. In fact, she said that she has always understood that the regulation was costly! ;-) Such a widespread "turning of the coats" right before the alarmism's collapse has been predicted by many.

The new document also criticizes the EPA for an unbalanced summary, e.g. for the failure to notice that a hypothetical warming would be beneficial at least for states like Alaska.

The Green Sheet ("ee", not "i") has already revealed that Obama plans to kill the polar bears.

But don't get carried away. All the statements above were only written by someone in the Obama administration and they happened to be included in the OMB summary. So far it's not clear whether the whole document has this character or whether it is an inconsistent bound state of individual opinions. The latter would be disappointing but it would still be a huge step forward from the tragedy of the "consensus".
Luboš Motl v 7:02 PM
Share