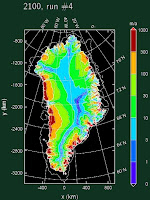 The arXiv blog has brought our attention to a new paper by Ralf Greve and Shin Sugiyama of Sapporo, Japan,

The authors decide that the most important feedback mechanism to study is the lubrication of glaciers by the meltwater which accelerates their motion towards the ocean. The picture I added (shift-click to magnify in a new window) shows the surface velocity (in meters per year) obtained by their best model. You can see that this effect matters primarily near the West Coast.

See also the change of the surface topography between 1990 and 2350.

Even though they assume an unrealistically high warming by 3 °C per century (and stabilization of CO2 at 1,000 ppm later), their simulation rules out catastrophic hypotheses about the melting ice in Greenland, e.g. those by James Hansen (do you remember scientific reticence where he waved his hands about similar feedbacks and predicted 10-meter rise of sea level per century?). The simulation predicts 18 centimeters of rising sea levels by 2100 from this major source.


See also some reductions in the estimates of the impact of the West Antarctic melting: Washington Post.
Luboš Motl v 8:06 AM
Share