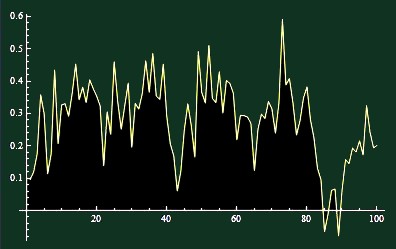 It makes April 2009 the second coldest April since 1999, after April 2008 that was even colder, mostly due to the La Nina conditions. Right now, all temperature indicators say that we experience ENSO-neutral conditions (neither boy, nor girl) while the global sea ice area remains substantially above the normal.

Later, UAH MSU reported a much more substantial month-on-month cooling, by more than 0.1 °C, as the anomaly dropped to 0.091 °C. The mid-troposphere anomaly is below zero. 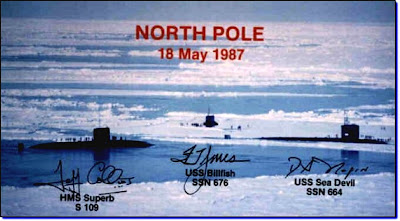 This is how the North Pole looked like in May 1987: click to zoom in. Another picture from the same summit of the three submarines.

The Catlin Arctic Survey team hasn't moved out of their tent for more than a week; they are still waiting for the resupply in a rather bad weather. However, Pen Hadow and two companions are lucky because the ice beneath them is moving towards the North Pole now, almost by 10 km a day.

They have already missed the April 30th deadline. "No one should expect to be picked up from there later than [that]," Hadow was told in May 2003 when they dramatically saved his life in the North Pole. ;-)

You can see that if they don't succeed to drown in the Arctic, they will show that the Arctic has cooled down considerably since May 1987 (the North Pole was largely melted in May even though it was still the Cold War!) and they will be killed by their fellow believers once they return to Britain - because they would have become overrun by the denialist Devil who wants to make an affordable salvation of the planet impossible.