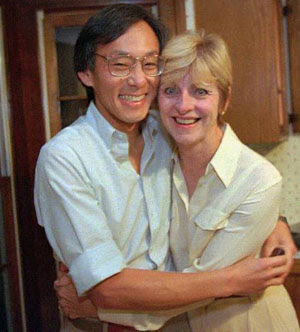 As The U.K. Times have informed us, Steven Chu, a physics Nobel prize winner who became the U.S. secretary of energy, was inspired by his wife's hair and has found a new Al Gore Rhythm to save the world: just paint the world white! ;-)

A white roof. All cheered as the tarps came tumbling down for the last time. The final roof panels are in place, this historic day, 27 July 2008. We're weathered in! Hallelujah!

Using your roof as a fridge of the Earth

And you know, such a policy would indeed be much cheaper a method to cool the planet than the attempts to regulate carbon dioxide, as we will see.


On the other hand, this method shows how ludicrous the attempts to cool the Earth are. A typical landlord in a warm city doesn't pay much attention to the color of the roof even when it comes to the temperature of her own house. Such a change of the roof color may reduce the average annual-daily equilibrium temperature in the building by a few degrees or so.

Now divide the energy difference produced by one roof over the whole surface of the Earth, 510 million squared kilometers. A roof may be 100 squared meters which is 2 x 10^{-13} times the surface of the Earth. The corresponding cooling of the Earth bought by a different color of your roof may be around 10^{-12} °C. The idea that someone would choose an uglier color in order to help the world to cool down by one picodegree Celsius is laughable.

Even if billions of landlords did the same thing - and there are not billions of owners of such houses in the world! - the change would still be a tiny fraction of one degree: millidegrees or centidegrees of Celsius. Houses are clearly not enough. We would have to play with the roads and introduce racism into our appraisal of plants: dark plants suck while the white plants are great!

(But the dark plants arguably consume more CO2 in average, so it's a very subtle trade-off.)

The results would still be absurdly small even if the whole world happened to co-operate with this childish game. This game may sound as a joke but if you do the same calculation with the CO2 consumption, you will end up with results that are even more absurd and tiny.

So 10^{15} kilograms of CO2 adds about 1 °C to the temperature. You can see that one kilometer with a car, or 0.08 kilograms of CO2, adds roughly 8 x 10^{-17} °C. Let me write the number in the non-scientific notation because it is more revealing. If you drive your car and add one kilometer, you should feel as a mass killer because you raise the temperature of the Earth by

Especially if you realize that this warming could actually be a (tiny) good thing, you must really feel like another Adolf Hitler who is building new concentration camps by using the car, as James Hansen "teaches" us. In the text above, we had a lot of fun with those 10^{-12} °C that a different color of your roof may subtract from the global mean temperature.

But once we have looked at the CO2 numbers, this picodegree of cooling (or warming) suddenly looks like a gigantic temperature change. You must drive 12,500 kilometers with your car to warm the Earth by the same picodegree that you "save" by painting your roof white. Indeed, painting the roofs seems as a more efficient way to cool the planet than attempts to reduce our consumption of fossil fuels.

Even if a brunette changes her hair color to blonde, the effect on the energy budget of the Earth is equivalent to many kilometers of driving her car. One needs billions of cars driving millions of miles (each) to accumulate one degree.

An epilogue by Feynman

But none of those "concerned" people has ever made any calculation of this kind.

Here they are, slowly coming to life, only to better interpret An Inconvenient Truth. Imagine! In modern times like this, guys are studying to go into society and do something - to be a climate alarmist - and the only way they think that science might be interesting is because their ancient, provincial, medieval problems concerning the judgment day are being confounded slightly by some new phenomena such as white roofs...

They don't understand technology; they don't understand their time. And I thank R.P. Feynman for the last two paragraphs from "Is Electricity Fire?", originally written about rabbis, that I could reproduce without any substantial modification. The main difference I see is that the young rabbis would be unable to double the prostitutes' income in Copenhagen, unlike the literally f**king climate policymakers.