I am getting ready for a trip to Bratislava, the capital of Slovakia, where our fellow TRF reader Alexander Ač moderates a debate about climate change tomorrow at 5 pm local time,

Climate change: a threat for the 21st century or propaganda?

featuring your humble correspondent and Prof Milan Lapin, a distinguished Slovak climate expert who is so far on the wrong side of aisle. ;-) Infonet.tv is likely to broadcast it but as you can guess, I prefer if no one watches it.

While I also love CO2, the figure "2" would be written as a subscript and not a superscript if the author were a skeptic and not an alarmist. ;-)

Alexander allowed me to embed his nicely summarized 25-page presentation (written in Slovak) with the topics to be discussed, divided to 4 categories (causes; symptoms and impacts; forecasts; solutions): full screen. By the way, the influence of skeptical resources on him seems somewhat visible, doesn't it? ;-)

I don't plan to be too combative but if I were, there's a good example to follow. Pilsen is hosting the 2009 hockeyball world championship. Czechia has not lost a match so far (not even the 3:0 duel against the U.S. and an epic battle, 3:2, against a strong India) and added a victory over our Slovak brothers, 2:0, today in the afternoon, despite Slovakia's ability to beat the majestic empire of Greece, by the modest 20:0 score. ;-) I love sports where results and differences are counted by orders of magnitude.


Meanwhile, Antarctica still refuses to join the global warming bandwagon, a six-year measurement of the ice-shelves showed. They will keep watching and watching and on one sunny day in the future, they will be able to show global warming on that continent by a careful study, achieving the same thing that most climatologists do by tricks.

Dmitry has pointed out a new paper that claims to refute all of cosmoclimatology (see the sunspot-climate correlations). The main ingredient of their work is a new picture of the structure of spiral arms in the Milky Way. The authors interpret some data as saying that the Milky Way has no arms, no spirals, and no structure, so there can't be any quasiperiodic phenomena in it. I wonder whether our Galaxy at least still looks as milk. 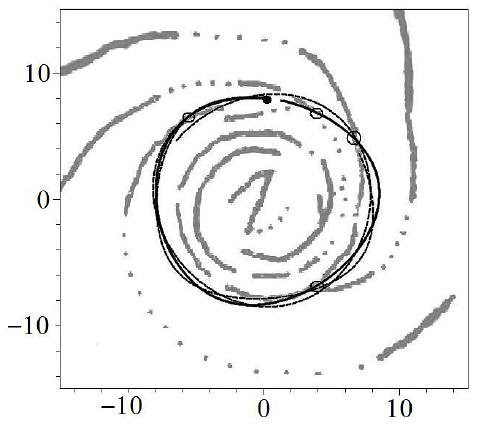 This caricature of theirs "proves" that our Galaxy is a complete mess. You may compare it with this picture of NASA's GLIMPSE team (credit: R. Hurt)

and decide which of them is more convincing. The present authors use some model-dependent reconstructions of carbon monoxide in the galaxy (sorry, no citations of this paper) with the same Martin Pohl on the author list. All these guys are literally obsessed with carbon oxides. Even if the models were right and their CO distribution were OK, the dominant factor for the rays - probably Hydrogen - may still follow a different distribution.

Why would one use such a less accurate, less relevant, less directly observed gas and - after seeing no structure in the noisy data - made big statements about the refutation of those 140-million-year periodicities that seem to be confirmed by 4 independent types of data and that only admit a galactic explanation so far?

I also have problems with their pattern speed - their claimed periods are 500 million years or so. According to sources that can be traced, like those in this table, the spiral pattern speed period is 50 million years while the Sun's galactic rotation period is 220 million year (in negative direction: the existence of the minus sign is another hurdle they have yet to master). These are periods, so for a higher number of peaks along the period, the reduced periodicities will be even smaller.

Where did they get their nearly-billion-year periods?
Luboš Motl v 12:19 PM
Share