The physics arXiv blog has brought our attention to a paper that seems pretty interesting to me:

Goldenberg, Levy: Distance Is Not Dead: Social Interaction and Geographical Distance in the Internet Era 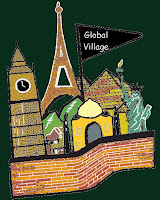 We often like to say that the Internet has made our blue planet smaller by simplifying the geographically distant relationships. We live in a global village, and so on.

However, what is often neglected in these popular clichés is that the Internet has also simplified the local relationships. And in fact, the computers have also simplified our ability to distinguish the nearby contacts from the distant ones. We have good reasons to prefer the local ones in many contexts because they can be coupled to physical interactions and the same interests in local events.

As a result, our focus actually became relatively more local and less global, since the first moments when the communication over arbitrary distances became acceptably doable and cheap. 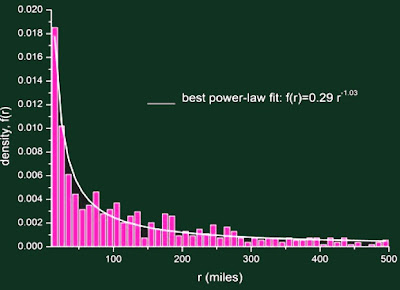 The figure above summarizes the best power law fit for the number of Facebook contacts, written as a distribution "f(r)dr" with respect to the distance "r" in miles. You can see that the distribution goes essentially as "1/r": their exponent is "-1.03" which is very close to minus one.

This is an interesting exponent because "dr/r" is the same thing as "d ln(r)". It means that the number of contacts is the same for every "decade".