Harvard University has become a role model in the discussions about the fate of wealthy universities in the wake of the economic downturn. A kind of irrational hysteria is controlling many journalists and members of the university community, too. See e.g.

in Boston magazine. During the Golden Summers Years, everything seemed rosy. The university president had bold plans and he expected great work from the members of the community, too. Needless to say, many people were irritated by this atmosphere of high expectations - and the academically weaker ones were much more likely to be irritated. Greetings to Cornel West. 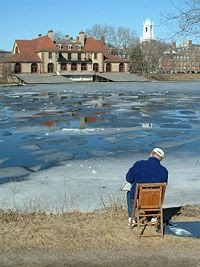 Summers decided to rebuild Allston, a neighborhood of the Greater Boston across the Charles river from Cambridge. On the favorite picture I took, the painter is sitting on the Allston side and he is looking at Cambridge; click to zoom in. Harvard began to build the future world's headquarters of genetics and other biological sciences. Some details were not yet decided but the ambitions were great.

But very often, after Summers come the Falls.

Before the market crash of 2008, the endowment was at USD 37 billion. That's very close to the assets of the world's wealthiest person today. As you know, these people were most severely hit by the crash, relatively speaking. The billionaires' worth dropped by 50% in average. Harvard has only sacrificed 30% or so, getting closer to USD 25 billion.

You can see that it was no extraordinary loss relatively to other extremely wealthy individuals and institutions, and Harvard has clearly been one for many years even though some victimist people who are being fed by the institution (imagine the Feminist or Black departments or other departments of professional whining parasites) still love to consider themselves poor. The wealthy individuals and institutions are exactly those that can afford to store their savings in risky assets - because they can afford (or at least "survive") their drop which is what risky assets sometimes do. Harvard managers have followed a similar strategy.

The endowments are financial "pillows" and it has become a standard policy that in average, a university spends about 5% of its endowment every year. The universities have several independent sources of money but the endowment usually grows by more than 5% a year in average. What should happen with these figures during an economic downturn such as the recent one?

I think it's obvious that the number "5%" should increase simply because the size of the endowment naturally decreases during the downturn. The very purpose of the endowment is to make the university ready for a few difficult years (or even decades). It's clear that some daily spending of almost everyone has to be regulated during recessions. But there should still exist a kind of long-term thinking.

It seems that the current leaders of Harvard - including the historian at the very top - are not capable of any long-term thinking.

You know, the Allston project has been one of the projects that approximately take a decade to be realized. So you simply shouldn't make substantial changes to the project - because of mood swings that are likely to disappear in one year - unless you are literally forced to do so.

It is simply wrong for Harvard to abandon its visions and its image as the world's #1 university. What is the recipe of Dr Faust?


If the endowment weren't so enormous, Faust concluded, the university would face a choice: Seek more money from alumni and the federal government, or "do less—less research, less teaching, at a lesser level of quality."

Well, now the endowment is no longer "so enormous" and the government and alumni are not likely to increase their donations during the thinner years: for obvious reasons, the different sources of the money are likely to decrease simultaneously. So Faust seems to be led to the third option. Her plan is to create a smaller Harvard whose quality sucks.

That's a nice plan but not too nice. :-) Imagine that a politician would honestly offer such a vision before the elections. Imagine that in 2008, Obama had openly said that he wanted the U.S. to cease to be a superpower. Everyone has known that under Faust, the quality of Harvard would plummet: some people have just found this development convenient. But so far, no one has been openly saying that this was the actual plan.

If one admits that the strength and quality are no longer important, such a proposition threatens the very brand of Harvard. Consequently, it may impact the magnitude of contributions in the long run. It is a very risky path to take. My recipe would be obvious: continue the life and projects as usual, keep the self-confidence, and get used to the fact that the endowment no longer looks infinite.

This point is a part of a broader discussion about the "stimuli" during the crisis. The U.S. government, with its immense debt, is trying to pour money to many places while the rich subjects such as Harvard are doing everything they can to shrink. This is just wrong. What should actually be happening during such crises is that the people, companies, and nations that are in debt should reduce their spending while those who are in the black numbers should continue to live and stimulate the economy by hiring bricklayers and people in hundreds of other occupations.

And if an institution such as Harvard depends on the identification of its brand with quality, it should try to keep it this way. If it has to fire someone or close a department, it should do it to those non-essential ones for the quality that could have been added when the pockets were full. Genetics is not an example; women's studies are. Needless to say, open letters usually demand the opposite thing, a further replacement of quality scholars by professionally whining colorful people and other victimists.

Among good news for the school, one of the bosses of the anti-Summers jihad, black victimist Lorand Matory (who authored the no-confidence rant, among other things), is leaving it. In 2005, I've had as huge problems with this nasty jerk as Summers himself.

Consider a typical interval of time in between two economic downturns. Some companies and endowments grow, some shrink. Some companies produce great profits, others have to borrow in order to create profits in the future: at least that's what they're promising. But the period in between the two downturns is pretty long and may be viewed as a typical period of a "cycle". And if someone is not able to get rid of his debt during one such period, it seems to mean that he is probably borrowing more than he should.

On the other hand, if someone stays in the black numbers after such a cycle, it means that he can afford to borrow more. The companies and institutions that are capable to stay alive after one cycle are the viable ones and deserve further loans while those whose debt has increased after the cycle deserve fewer loans. Isn't it obvious?

Of course, Harvard isn't really producing anything. But you can imagine that the donations it collects are the "profits" that it generates by working on its name and by making itself look (and, less often, be) important for the society. And it's been doing a much better job in these matters than the U.S. government. The latter is deeply in the red numbers.

It's clear that some additional money pumped into the system may speed up the economy. But who should be spending this money? Where should the money come from? It seems clear to me that they should be spent exactly by those who know what they're doing and why they're doing so, especially those who have some long-term plans that are similar to other plans of theirs that have already turned out to be successful in the past.

It means that the money paid by Harvard to the bricklayers in Allston is a relatively good investment that is likely to bring something in the future while the money poured by the U.S. government to random places that didn't seem to know what to do with the money yesterday is a bad investment of the same amount.

So it should become normal to realize that during a nearly unprecedented recession like the 2008-2009 one, universities should be spending something like 7% of their endowment a year rather than 5%. The endowment is not supposed to be constant - so the fractions computed out of it are not constant, either. They should realize that the current bad mood won't last forever and that the figure is likely to drop below 5% sometime in the future again. Responsible leaders simply can't surrender to some temporary waves of bad mood.

After all, sensible and rational long-term investors must have a long-term strategy, too. They cannot sell stocks when they're already depressed because it's a very stupid strategy: the stocks are more likely to be near the bottom (or may have bottomed up already) and that's the worse possible moment to sell them.
Luboš Motl v 8:41 AM
Share