Due to its limited chances (partly caused by the insufficiently inclusive relations to similar parties), I can't promise to vote "The Party of Free Citizens", a new Euro-skeptic of Petr Mach, but their TV spot is pretty amusing and their ideas are just right.

In Czechia, the most likely key match will be one between the center-right Civic Democrats and the left-wing Social Democrats; the remaining 38 parties and blocs will fight for their survival. A flash game is a nice training for the duel: don't be intimidated by the socialist politicians who will be threatening as you play. ;-) And I hope that the Civic Democrats will win in this "training" for the "real" elections to the national Parliament to be held in the Fall. 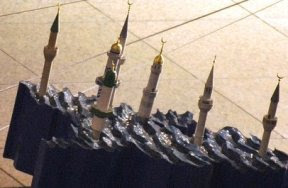 David Černý's provoking "Entropa" pictured the Netherlands as an underwater land only with the minarets that made it above the surface. ;-)

In the Netherlands, the polls are over. The victorious Christian democrats (CDA) with 20% were almost matched by Geert Wilders' anti-immigration PVV with 17%. As you know, I am no supporter of far-right parties but their strengthening may be viewed as a refreshing, and to some extent necessary, reaction to the growing influence of far-left, politically correct parties and PC wings of centrist parties.

Silly stories from the voting room

I arrived as the first person in my district. The voting room was a classroom of an elementary school. The second person who arrived there decided to support a true "personality" which, as I learned soon, was Miloslav Ransdorf, the #1 of the communist party ticket ("a walking encyclopedia with a skewed mouth").

Because I really didn't want to argue with a smiling communist, I told him that I was just arranging the purchase of a new laptop (not yet completed) for the father-in-law of the first non-Soviet non-American astronaut, Vladimír Remek. The voter happily said that Remek was the #2 on his preferred ticket.

I had known that the guy from the commission supervising the election process and checking my ID was a merry communist, too. ;-)

So I told him "good afternoon or honor to the labor or whatever is your preferred greeting now". Although "honor to the labor" ("čest práci") has been the preferred greeting of this guy and his comrades for 40+ years, he didn't look particularly nostalgic or happy about my greeting. But he still kindly allowed me to vote, even though he made it very clear that he would be happy if I failed to submit the envelope to the proper box.

On the street, wind succeeded to spread the remaining 39 tickets across the road. Fortunately, there was a nearby class with 10 girls (age 6 or so, first graders or kindergarten) who immediately and happily helped me to collect the mess. One of them, with the highest number of tickets, was declared the winner of the contest by me and their teacher. :-)
Luboš Motl v 11:10 AM
Share