Firefox 3.5 is very slow to load

If your Firefox 3.5 is very slow to load, the fix may be surprising: open Internet Explorer, go to Tools / Internet Options, and in the history section, remove the temporary internet files. Click OK. Firefox will start more quickly (less than 10 seconds instead of a minute). This is a temporary fix: an improved version 3.5.1 will be released before the end of July. But back to the original text:

Mozilla Firefox is arguably the most important browser for TRF readers, especially because of the "Operation Aborted" bug that has returned and annoys most of the Internet Explorer 8 users again, despite these four new genuinely funny MSIE8 ads.

Meanwhile, with its 1.8 percent share, Google Chrome 3.0 beta (or earlier versions) continues to be a minority browser (although it's the primary browser of mine), partially for irrational reasons, partially because of the largely non-existent plugins.

Mozilla has just completed the new, faster, and better version of its browser,

It was released 40 seconds ago on the page above. Before you download the installation program from the page above, you should try to update your browser by Help/Update. The FF 3.5 RC3 users won't be offered any update because the third release candidate "succeeded" and is bitwise isomorphic to the final edition. 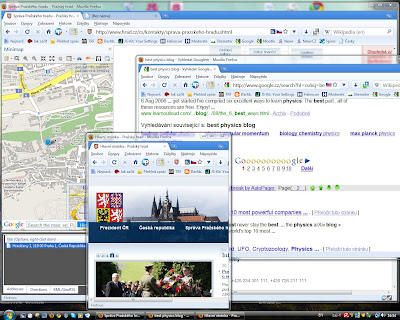 I also recommend you to visit Tools/Addons manager and install a couple of useful plugins such as AutoPager (automatically downloads "next page" in various search engines, so that it is simply attached at the bottom and available by "Page Down"), CoolIris (a nice 3-dimensional wall with relevant pictures for each page), Flagfox (a flag icon showing the country of the current server), Minimap Addon (an easier way to open a map with a physical address that appears on a page), or the Chromifox Extreme Theme (resembling Google Chrome).


If you're a robot, you may want to try the about:robots URL
Luboš Motl v 4:45 PM
Share