The point of E8 in F-theory GUTs

Jonathan Heckman, Alireza Tavanfar, and Cumrun Vafa wrote a 106-page article (PDF) arguing that if one wants to avoid fine-tuning, F-theory highly favors a deeper level of unification than conventional GUT theories, one that starts with the E_8 group, which is familiar to the Telegraph readers as the surfer dude group. :-)

There should be exactly one point in the F-theory compactification where the group gets enhanced to E_8, and then lots of realistic features for phenomenology automatically follow. This new holy grail is described by the following diagram: 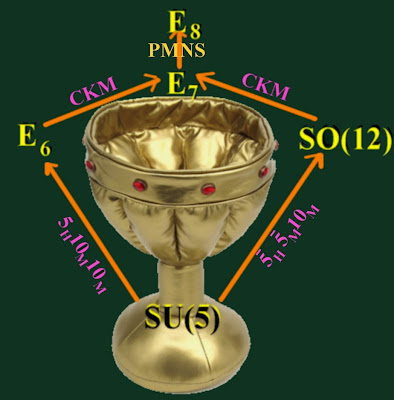 The starting, low point of their holy grail unification is an ordinary A_4 = SU(5) group - the canonical minimal choice in field theory. It lives on a real four-dimensional submanifold.

A hierarchical character of the CKM matrix indicates that the top and bottom Yukawa interactions arise from nearby loci: it makes sense to imagine that they get unified to an E_7 singularity at one point. Finally, a minimal neutrino sector with a mildly hierarchical lepton mixing matrix (PMNS matrix) elevates the requirement for this singular point to carry an E_8 group rather than its E_7 subgroup.


The identification of fermionic mass hierarchies and the unification involving the largest exceptional group sounds like one of the breathtaking results that sometimes ignite scientific revolutions. In field theory, only gauge groups could be unified and the matter could arise in arbitrary representations. String theory unifies gauge groups with the matter - so the flavor imposes new constraints and actually implies a further extension of the gauge symmetry. The full F-theory hidden manifold looks like this: 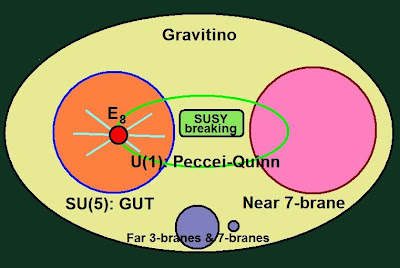 The SU(5) brane gets enhanced to D6, E6, E7, E8 at special points. It intersects with a Peccei-Quinn brane where SUSY gets broken. The latter also intersects with a nearby 7-brane. There can be additional, "far" 3-branes and 7-branes.

Their scenario avoids many problems of seemingly similar models and is immensely predictive. For example, gravitinos between 10 and 100 MeV dominate dark matter but in their models, they arise from decaying saxions (which are in the 230-1000 GeV range), leading to an acceptable abundance. In another, less likely region of their parameter space, the dark matter is made out of axions.

If their model is correct, it follows that PAMELA, ATIC, FERMI, PPB-BETS, and HESS can be observing neither decaying nor annihilating dark matter. Monodromies and the "SU(5)GUT x SU(5)transverse" subgroup of E_8 play a very important role in their analysis.

Scenarios with both Majorana and Dirac neutrino masses are discussed. In all but one Dirac scenarios, string theory determines that the minimal representations for the SUSY breaking messenger fields are 10+10* (pretty much the only new fields that go beyond minimal SUSY GUT) which seem "more complex" than the seemingly minimal choice 5+5* according to field theory combined with naive numerology. A 10+10* pair transforms like 5 or 5* under the transverse SU(5) and behaves like three times a 5+5* pair. 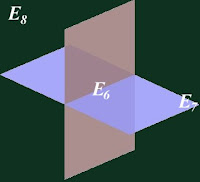 Note that the gradual enhancement of the group to E_8 at a special point is the opposite behavior than what you could see in the picture of intersecting heterotic fivebranes where the E_8 group occurred at generic points of the bulk and it was broken to subgroups at submanifolds of an increasing codimension.
Luboš Motl v 8:35 AM
Share