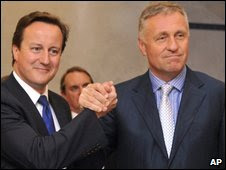 The European People's Party, the largest group in the European Parliament, has arguably become way too politically correct.

Despite their official center-right ideological affiliation, the well-known politicians connected with the EPP - such as Angela Merkel and Nicolas Sarkozy - and many of their less famous colleagues turned out to be essentially indistinguishable from the self-described European socialists when it comes to topics such as euronaivism, global warming, multiculturalism, and many other important issues.

Now, the British Conservative Party and the Czech Civic Democratic Party i.e. ODS after the split with its founder, President Klaus, have also shared a lot of postmodern opinions with the EPP, a group that they have belonged to so far.

However, one can at least see clear signs of hope inside these parties. For example, despite the personal tension between ODS boss Mirek Topolánek and President Klaus, it must be clear to every impartial observer that in his honest opinion, Topolánek believes neither the benefits of the Treaty of Lisbon nor the hypothetical threats of climate change - so his opinions are not really that different from Klaus's.

Today, the Tories (26 seats), Polish Law and Justice or PiS (15 seats), ODS (9 seats), and five more MEPs from five countries have established a new club (55 seats), the European Conservatives and Reformist Group. It is defined by center-right values and their common opposition to European federalism. Let's hope that the newly achieved isolation from the crypto-socialists in the would-be center-right parties will help them to converge towards some natural, more sensible, and more honest approaches to many political and ideological questions of the current era.

The Czech and British parties are the strongest groups from their nations. ODS really defines the political mainstream in the post-Velvet-Revolution Czech Republic. Previously, ODS wanted certain natural allies on their right side, such as Italy's Northern League or Danish People's Party, to join the club. Cameron cares about his image in the PC media so he has vetoed the idea.

Well, the real problem may not be David Cameron: it may be the huge left-wing bias of the contemporary Western media - a bias that he is only rationally accommodating to. We don't experience such a scary thing in the Czech media. For example, the PiS has banned obscene live moving homosexual exhibitions on Polish streets. Cameron doesn't even agree with this ban but he is being chastised by the extremist media just for his teaming up with the "homophobes". Wow, what a sin. Despite a highly tolerant attitude to the sexual deviations by the liberal and mostly atheist Czech people, no one in the Czech media dares to criticize the conservative decision of the Polish Christians.

Other MEPs in the EPP suddenly have a chance to upgrade to the new group, too.
Luboš Motl v 9:22 PM
Share