Microsoft Research has just released its

What is the project? It brings you all seven Messenger Lectures that Richard Feynman gave at Cornell in 1964. Firefox or Internet Explorer are needed. Silverlight (Microsoft Flash Replacement) will install automatically if you don't have it yet: the evaluations of this system seem excellent so far. 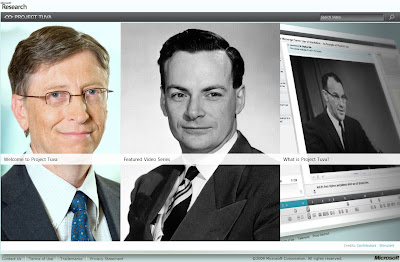 The video player includes the complete lectures as subtitles and allows you to make notes, too. Relevant extra pictures, texts, and links appear on the right side and additional notes will be added in a few months.

In the introduction, Bill Gates says that he considers these lectures to be best ever. He has hoped to bring them to the public for 20 years. Now, two decades and 40 billion U.S. dollars later, he has realized his dream. :-)

The seven parts discuss
For example, the fifth part nicely repeats everything you have heard about the arrow of time and statistical physics from your humble correspondent and thoroughly debunks all misconceptions that you have heard about the same question from Sean Carroll. Three of the lectures have already been presented on this blog: the first, the second, and the fifth.


Gates thinks that the cool Feynman lectures are just a tip of a future iceberg.

Because it has already happened anyway, the comment section is open to people's voices about the new patent by Bill Gates et al. (see also Google News) to suppress hurricanes by pumping cold water from the depths of the oceans to the surface.

I would actually guess it is feasible but you may have done more careful calculations than my estimates.

55 million years ago, an unknown source added a lot of carbon to the atmosphere. At the same moment, the temperatures rose by 5-9 °C within a few millenia. Except that Zeebe, Zachos, and Dickens (Daily Tech, Google News) claim in Nature Geoscience that the greenhouse effect couldn't have been sufficient for this change, and most of the change had to be caused by another, so far unknown mechanism. The authors determine that the IPCC models can't work as believed by some scientists and the errors of the IPCC predictions are of order 100%.
Luboš Motl v 11:00 PM
Share