Let me start with a test of intelligence. 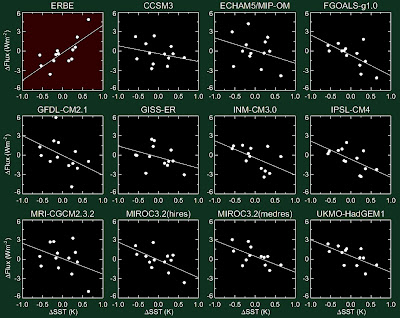 Shift-click to zoom in.

The picture above shows graphs extracted from 12 (...) climate models. Which of the models doesn't belong there? Which of them is the irrelevant fringe minority? A result of research funded by oil industry?

Yes, it is the first one because the function in the graph is increasing. The consensus of climate models proves (...) that the function is decreasing, doesn't it?

To be sure, the model that doesn't belong is not really a model. Instead, it's reality, the old denialist Ms reality. Only the remaining 11 graphs come from models.


For the convenience of RealClimate.ORG readers, I have painted the first model red so that they don't have to learn the difference between the increasing functions and decreasing functions.

Where the graph was taken from?

The graph is taken from a new paper by Richard Lindzen and Yong-Sang Choi in peer-reviewed Geophysical Research Letters. We have already mentioned the paper on this blog. The results were already announced in Richard Lindzen's talk about climatologists' sensibilities.

On the determination of climate feedbacks from ERBE data: full paper (PDF), Anthony Watts' discussion, list of papers including this one (AGU)

What does the graph mean?

The x-axis is the change of the sea surface temperature (Delta SST), between -3 and +3 degrees Celsius. The y-axis is the outgoing radiation budget from the latest version of NASA's Earth Radiation Budget Experiment (ERBE) nonscanner data, between -6 and +6 Watts per squared meter.

When I debated Prof Milan Lapin, a Slovak climatologist, in Bratislava, he self-confidently told us that the energy budget is now being directly measured, so everything is just great for him.

I confirmed it was being measured but I also mentioned that the numbers that are actually measured disagree with most of his big statements. The graph above is the most convincing example of the huge problems that the hypotheses of people such as Mr Lapin face when they're compared to the experiment.

Significance of the graphs

When the sea becomes hotter, various things change in the climate system. The IPCC emphasizes the "positive feedbacks".

The greenhouse effect from water vapor is their most favorite example. Hotter oceans may emit additional water vapor to the atmosphere which absorbs the heat emitted by the Earth and helps to heat the atmosphere even more than before. By the way, this is just an expectation, not a measured fact, because at least the relative humidity was actually decreasing as the globe was warming up.

However, this is clearly not the only effect that's happening, and the important thing is the sum. Does the warming get amplified by producing additional warming, or has the sum of the secondary effects the opposite sign than the climate variation that induced them?

Lindzen's iris effect has been the canonical example of a negative feedback.

The picture at the top shows that all 11 climate models predict that the function is decreasing: warmer oceans allow less heat to be emitted which adds to the original warming. That's the positive feedback that the IPCC likes to believe because without positive feedbacks, everyone can easily see that the "bare" greenhouse effect is so small that the greenhouse effect would not be worth a discussion, except for extreme scientific specialists.

However, the real measurements show that the function is increasing. Warmer oceans actually allow the system to emit more energy and cool down more efficiently. The total feedback is a negative, stabilizing one, just like you would expect from a stable system such as our hospitable planet, because of La Chatelier's principle.

The Lindzen-Choi approach is a clever method to measure the feedbacks "directly".

Their conclusion also means that the climate sensitivity i.e. the expected warming obtained from doubling of CO2 from 280 ppm (in 1800) to 560 ppm (in 2100) is actually smaller than the bare value of 1.2 °C. It could be close to 0.5 °C which would mean that no additional warming from CO2 is expected by 2100.

Lindzen and his co-author also discuss the large error margin with which the feedback coefficient is being announced by the IPCC: the factor is not really getting any more precise as tens of billions of dollars are added to climate science.

The reason is that the correct value of the factor is not even in the ballpark of the IPCC figure so you can't get to the right value by "gradual improvements" of their methodology. Their models are qualitatively wrong.

Related: Dick Lindzen also has a new article for a broader public in the Quadrant Magazine, Resisting Climate Hysteria (click). Thanks to Bob Carter.

A subset of the authors was very kind to Lonnie Thompson from the same Ohio State University: they wrote about their insights in a very diluted way, so that Mr Thompson's AGW religious sensibilities are not hurt too much.

Amy Clement, a sexy climate employee, and two of her less sexy colleagues have published a very different paper in the July 24th issue of Science:

What methods do they use to achieve their unusual conclusion?

Using observational data collected over the last 50 years and complex climate models, the team has established that low-level stratiform clouds appear to dissipate as the ocean warms, indicating that changes in these clouds may enhance the warming of the planet.

Well, they use some data but also "complex models". It's clearly a basic logical error to try to show that the models represent a feature of the climate incorrectly, while using the same models to derive this conclusion. ;-)

In other words, Lindzen's and Choi's paper shows that the combination "reality and models" is logically inconsistent, so one can derive anything - both correct and incorrect statements - from such an inconsistent set of axioms. Whatever you derive is therefore inevitably untrustworthy.

So it's not a "stunner", as Science claims. The Clement et al. paper is rather another example of the same stupidity that we have already gotten used to. The models will first have to be fixed - especially when it comes to the cloud-temperature interactions - and only when this job is done, they can be used to derive new sensible predictions and retrodictions about the cloud-temperature relationships.

Moreover, the Clement et al. paper really tried to study a small region in the Northeast Pacific whose cloud dynamics could be very different from the whole globe. So it would be another mistake to think that the paper would tell us something about the global climate, even if it were correct.

Also, the paper doesn't quite resolve the question which is the cause and which is its effect. We may summarize it: just forget Clement et al., it's irrelevant crap.
Luboš Motl v 7:02 PM
Share