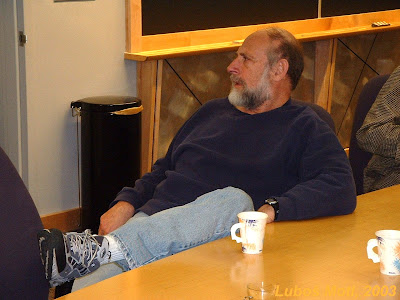 It promotes the analogy between Darwin's evolution in biology and eternal inflation based on the anthropic (non-)selection in fundamental physics. Let me assume that the readers agree with me and Susskind that Charles Darwin was a great scientist and his (and Wallace's) paradigm explaining life is a true and fundamental insight of biology and one of the most important insights of science.

The basic idea behind Susskind's analogy is simple: God is dead, the whole world is a gigantic, inelegant mess, and some structures - such as worms, DNA sequences, and Calabi-Yau manifolds with fluxes - win because they're more viable than others (able to produce a large enough number of self-conscious or intelligent individuals). We're supposed to believe that the world is much bigger than we have previously thought; that's not shocking because such a transformation of the scientific image of the world has occurred many times in the past. We know that the Universe is much bigger than the world that our ancestors thought to be inhabiting.


We're also supposed to believe that many things and parameters that were believed to have an explanation are pretty much results of accidental events in the history and no canonical explanation of their properties and values therefore exists. This possibility is not new, either. Kepler believed that the radii of the planetary orbits were linked to the lengths of edges of those elegant Platonic polyhedra of a fixed volume (the same one for all polyhedra, or something like that). However, more realistic theories of the birth of the Solar System have convinced the people that the radii are more random and probably uncalculable in practice.

I agree with Susskind that such a reduction of calculability is a conceivable answer to these big mysteries why the detailed properties and low-energy parameters of our Universe are what they are. And I even agree with him that the anthropic or similar version of eternal inflation is the only currently available, sufficiently specific scenario of the vacuum selection that is "up to Darwin's standards". And I agree with him that only the people who can't distinguish reality from wishful thinking don't see that this is the case.

However, Susskind's analogy has two basic classes of problems:
These two classes are actually closely related. Anthropic eternal inflation may have conventional, "predictive" or "unique" alternatives even though no explicit enough, satisfactory mechanism is known today (which shouldn't be surprising because it is much harder - and a more constrained task - to find an elegant and predictive description of the Universe than to find an inelegant description saying that everything is just an unpredictable mess).

But I want to spend some time with the second category of the problems with Susskind's analogy, namely that it doesn't really work. What is missing in Susskind's anthropic picture of the eternal inflation (at least in its presently available form) that is present - and crucial - in Darwin's picture of the origin of species? The answer is not hard. Just think for a little while and you may find the answer, Lenny. ;-) Well, what is missing is actually

What is evolution and why is it missing in the anthropic picture of the world? Well, evolution is a process by which more complex and more sophisticated forms and structures emerge, by reasonably small changes from one generation to the other, from simpler and more primitive forms and structures at the beginning, from the common ancestors.

All the details of this fundamental paradigm of biology strikingly contradict the picture offered by the anthropic models of eternal inflation that are available on the market today. Why?

Susskind says that the counterpart of a DNA code is a Calabi-Yau manifold with branes and fluxes - or other data needed to describe a compactification or a background. I agree with him that this is the only possible translation of the DNA code if the analogy works. However, what he doesn't tell us is what the common ancestors (in the landscape) are and how we distinguish the primitive creatures (or Calabi-Yau manifolds) from the more sophisticated ones. In fact, this ordering - which is so fundamental in the biological evolution - is exactly something that the anthropic physicists viscerally dislike.

The simpler organisms are likely to have a simpler and shorter DNA code. The length of the DNA code is surely not a universal quantity that determines how complex a species is. On the other hand, there is clearly a positive correlation between the complexity of an organism on one side and the length of its DNA code on the other side. And in principle, we might develop a more accurate algorithm to determine "how much evolution" a given species needed to naturally evolve from the primordial, most elementary life forms.

None of these things are available in the anthropic picture of eternal inflation. In fact, as I have already mentioned, it is a very basic part of the anthropic philosophy that such information and algorithms don't exist. The anthropic people assume that there exists a universal "probability distribution" on the landscape that determines the probability of each compactification - and that this distribution no longer evolves.

Note how absurd such an assumption would be in biology. To preserve the analogy, biologists would have to say that there exists a fixed quota that assigns a constant number (or fraction) of individuals to each possible DNA code i.e. to each possible species. What an absurdity! You know, for every human, there should be 3.14 polar bears, 1917 mosquitoes, and 2009 strawberries. The world of genuine life forms doesn't obey similar ultracommunist pro-stagnation policies. It keeps on evolving.

A few billion years ago, the number of primates was very small, almost certainly zero. But it is pretty high today. And in the future, the Earth (or the Milky Way) may be dominated by a new group of species that don't exist today. And the evolution may continue afterwards, too. That's what evolution is all about.

Where is the fundamental difference that kills Susskind's analogy in such a brutal way? Well, the basic difference is that the anthropic physicists want to assume some evolution but they also want to assume that our compactification is an element of a family of compactifications that has already "evolved by an infinite amount". They believe that such a thing can make sense because there is a "fixed point": after some time, the evolution ends.

But the analogy between the landscape of compactifications and the landscape of DNA codes is much better than they would like to. And it actually gives a very different answer than they want to hear. If you look at the DNA landscape, it is very clear that there is no "fixed point" that could define the probability distribution after an infinite amount of evolution: the evolution simply never ends. The more you evolve, the more complicated life forms you get. The set of all compactifications is as infinite (but countable) as the set of DNA codes so one must expect the same results in physics, too.

There are other reasons to see that the concept of an "infinite pre-evolution" probably cannot ever be well-defined and that it contradicts the basic philosophy of Darwin's evolution. In fact, it even contradicts Susskind's "atheist" principles. The infinite pre-evolution resulting in a universal, forever fixed probability distribution on the landscape is pretty much equivalent to no evolution. It is another incarnation of God who already creates a "perfect world" from the scratch: the "perfection" is defined by His probability distribution on the landscape, the only one that makes sense and that cannot be improved.

As the paragraphs above make very clear, I actually believe that the vacuum selection in the real world around us is much closer to Darwin's evolution than Lenny Susskind is willing to accept. The vacuum selection that resulted in the "right" Calabi-Yau manifold (or other data specifying our background) was indeed a form of natural selection, analogous to one in Darwin's theory. It was one of the first steps of evolution that were needed to create life, a step that took place long before eukaryotes saw the sunshine for the first time (because eukaryotes already depended on our beloved Calabi-Yau manifold whatever it is).

In fact, it is pretty likely that the humans are the first species on the Earth with hundreds of individuals who are able to study string theory. Paleontological evidence suggests that dinosaurs were not even able to build airplanes. Why do the relatively intelligent animals like us find themselves at the beginning - first few millenia - of an evolution where intelligence starts to play the role?

I think that a "minimality" principle (rather than doomsday scenarios) is behind all these observations. Only the minimal amount of evolution that is needed to produce a qualitative feature (or just a little bit more of it) has always occurred before an observer could see the feature. If you accept this rough principle, you should also expect that our Calabi-Yau manifold will be as close to the "elementary Calabi-Yau life forms" as possible.

The task is to find the criterion that determines which compactifications are close to the simple elementary Calabi-Yau life forms i.e. to the very true beginning of the world (they can be those with very small Hodge numbers, or similar properties), to learn how to construct their "relatives" (these family links may be much more diverse than just membrane bubble nucleation changing the fluxes by one), and investigate their kin in detail.

The explanation of our present hides in the past and the simple "ancestors" that existed in the past, not in the "asymptotic far future" as the anthropic people acausally believe.

I am convinced that such a process of looking at the origins will only bring us a manageable number of simple enough candidate compactifications - the basic tree of Calabi-Yau life with a few branches needed to produce a reasonable background - and our Universe will be one of them, much like the "monovacuist" physicists have always believed. When this task is achieved (and yes, it is much harder to realize than to fool ourselves that a cheap would-be solution is all we need), we will be damn sure that the solution is right. And we will also write much more convincing popular articles explaining why this picture is so consistent with Darwin's evolution than Susskind's article. ;-)