The leaders of several G8 countries suffer from a psychiatric disorder. They have commanded the Earth and the waters to keep their temperature within two degrees. Moreover, the CO2 output of most countries should drop by 80 percent or more - by a factor of five or more - by 2050. Yes, it is hysterical.

Well, this is actually not an agreement of G8, at most by G7 because the newest eighth member, Russia, finds this talk unacceptable and will reject it.

The rest of the BRIC group, i.e. Brazil, China, India, only views the climate talks as a method to get some additional money from the richer countries (redistribution is what the left-wing activists actually expect from such policies, anyway!) and to get to their level faster - either by getting richer or by making others poorer. They won't agree with any genuine reductions on their territories, either.

What does the "plan" actually mean?

First of all, the two points of the plan are pretty much unrelated. What will happen with the emissions is pretty much uncorrelated with the temperature change in any time frame that we can talk about. The correlation is small because a substantial part of the global mean temperature change - and probably a very large majority - has always been determined by natural sources and it is likely to remain so. So let us talk about the two issues separately.

The temperature change is almost certainly going to be less than 2 degrees Celsius in one of the two directions during the following 40 years. The typical change of the global mean temperature in 40 years has always been something like 0.3 °C. So far, it doesn't look like the mankind has changed anything about it. So getting to 2 °C is nearly a 10-sigma effect, a statistically impossible thing. 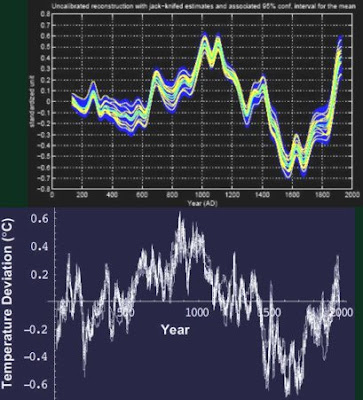 The global mean temperature naturally dropped by 1.3 °C or so between 1000 and 1600. The reconstructions are by Moberg (alarmist, up) and Loehle (skeptic, down) but you can see that there's no substantial difference here.

On the other hand, the global mean temperature certainly does change by 2 °C during longer periods of time. The Earth has seen 2 °C natural temperature changes in 500-year intervals many times. See the graphs above to understand that even in the last millenium, we were not far from such changes. But such changes become mundane if you look at longer intervals. The ice ages that alternate with interglacials after many (or dozens of) thousands of years change the temperature by 10 °C or so, sometimes squeezed into a 10-degree cooling in 3000 years (e.g. 130,000 years ago). Have those folks heard about them in the elementary school or did they skip the classes?

I suppose that for many teenagers, it has been always a better option to drink, smoke, and take drugs outside the school and be sure that you can still become a president of a country even if you are an uneducated ... person. And it turns out that they were right. Unfortunately, the list of fundamentally uneducated politicians includes people like Silvio Berlusconi, too. The political representations of many countries are flooded with people who lack basic science education.

The global 80-percent reduction of CO2 by 2050 may contribute by 0.05-0.30 °C of cooling before 2050 (our man-made warming with the current CO2 emission rates adds between 0.25 °C and 1.5 °C per century and we're talking about 20 years worth of erased CO2 emissions here) - depending on the feedbacks that reduce or amplify the bare greenhouse effect.

And this change will be clearly indistinguishable from other effects and noise (the achieved cooling is smaller than the effect of one El Nino or one volcano eruption), certainly for those people who don't have very accurate thermometers or who can't perform very accurate calculations, involving the averaging over time and over the whole Earth. So it makes basically no impact on the climate. Does it impact the economy? You bet.

Whether or not such a goal is achievable depends on the future technological breakthroughs.

If the people manage to invent a new technology or efficiently switch all of their industries to electricity produced by nuclear power plants or something like that, the goal is attainable and it may even become a formality. If they won't, and no one can be really sure whether such a massive replacement of fossil fuels will occur (it hasn't really occurred for 250 years so far!), the goal will be approximately equivalent to an 80-percent reduction of the GDP. The real problem is not that the plan is "certainly" impossible but it is that someone is promising something that he cannot possibly know whether it is possible.

The world's architecture in 2050 according to the newest G8 plan. Click the Harper to get to the source.

Nevertheless, a net GDP that drops to 1/3 of the present value is still pretty terrifying - especially if you realize that because the population may jump by a factor of 1.5, we're back to the five-fold reduction of the GDP per capita. It could make the world look like a world that was just decimated by a pretty large global war, one that may dwarf the World War II: see the picture above for an idea. Instead, most of us used to imagine that the people in 2050 would be richer. Recall that we're still talking about sacrifices motivated by a desired statistical cooling by 0.05-0.30 °C (relatively to the business-as-usual scenario) which some people consider a good thing for reasons that are not clear to anyone outside the AGW sect.

By the way, the fact that Russia as a member of G8 won't join this madness is not just a "perturbation" in the calculation of the CO2 budget in 2050. Instead, Russia plans to increase the CO2 output - a measure of its strength - by 30 percent by 2020. That's a 3-percent increase per year which, if extrapolated, gives you the increase by a factor of 1.03^41 = 3.35 by 2050. And if the industries will have to be moving from countries plagued by mad, CO2-hating policies (and politicians) to Russia (or elsewhere), be sure that Russia can see much more than a 3-percent increase a year. With such brutally different pro-growth vs anti-growth policies, be sure that all negative things that you (or "we") often associate with the Russian nation would become economically inconsequential in comparison.

Because the other G8 i.e. G7 members plan to lower their CO2 output by 80 percent by 2050, it is not hard to see that if the plans of all G8 members are realized, Russia's CO2 output in 2050 will exceed the rest of the G8 countries combined. Are we supposed to believe that the voters in the West will be happily watching how their previously prosperous countries are decimated and fully superseded by someone else? Or is it more likely that they will declare their politicians to be legitimate targets of daily assassinations and stop this lunacy within days or weeks? I surely guess that the latter would be more likely. In fact, the worst radicals are already becoming legitimate targets of assassinations today because the stakes are just getting too high.

These calculations of the future are silly childish games so someone must be making unreasonable assumptions about the future 41 years. I bet it is not Medvedev's aides in Russia.

What this agreement, if ever fully accepted, would actually mean will depend on the detailed implementation. If the only plan remains a "carbon-free dream" for 2050, nothing will happen until 2045 and the politicians in 2045 (or earlier) suddenly realize that the 2009 plan made no sense and throw it into the garbage bin where it will have effectively been, anyway. However, if someone will try to divide the 40-year plan into annual plans or the traditional communist 5-year plans, such plans can bring a destruction of the national economies that we can actually experience soon. Recessions would become the new standard.
Luboš Motl v 12:44 PM
Share