Globe's warmest days in a decade

The record cold temperatures are often covered on this blog. But I have no bias so you can learn about the record hot temperatures, too. 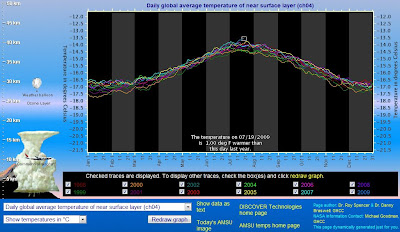 According to the satellite methodology

You shouldn't be quite certain that these were the hottest days on their record because the temperature may occasionally jump for a few days, even during Julies of cold years. (But yes, additional graphs indicate that the days were warmest in 20 and probably 30 years.) However, it is somewhat unlikely that a warmer day occurred on years that were 0.5 °C cooler than 2009 or even more. So chances are high that the day would be the warmest one, according to the same definition of the global mean temperature, since 1945 if not 1400 if not 6000 BC if not 125,000 BC, right after an interglacial when a warmer day had occurred almost certainly. ;-)

You can be relatively certain that the days we are just enjoying will remain the hottest ones after some small corrections are made at the end of the month. Why?

A sequence of records

There is no law that will prevent the temperature from increasing for a few days (July 20th was cooler, at -13.61 °C). The chances exceed 50% that the July 18th record will be rewritten again in a few days simply because the short-term behavior of the graph resembles the Brownian motion. Also, you shouldn't imagine that these records have a long-lasting effect. As recently as June 6th-June 19th, the temperature was actually lower than during the same days in 2008.

I am sure ;-) that you had to notice such an unprecedented shocking global heat wave. Did you survive the catastrophe and how? Today, every kid knows that the UAH-AMSU-A global temperature of -13.58 °C is a horrible fever that urges the kids to shoot their fathers in SUVs. Tell us about your experiences from the judgment days.

In Pilsen, the hottest days July 18th-19th were rainy, with temperature stuck around 10 °C: Ewa Farna's concert on the Pond of Bolevec was somewhat decimated by the bad weather. But the skies have become more pleasant afterwards. :-) I am also not asking Al Gore about his frying experience from the record hot days because Nashville, Tennessee broke the 1877 record cold temperature today. ;-)

The rapidly strengthening El Nino conditions and random noise are the two primary drivers to get credit for the globally warm days.

The probability that a particular Northern summer brings a hotter day than the 10 previous years is equal to 0.1 or greater. It's because with white noise, each year in the period has the same 10% probability to include the record-breaker. On the other hand, long-term persistence "reddens" the noise and makes the temperature more likely to increase or decrease quasi-uniformly which raises the odds that the extremum (or extrema) are found at the end(s) of the 10-year period.

If very low-frequency signals were completely dominating the evolution of temperatures, the probability that the latest summer has the hottest day would gradually approach 50%: the same chances of quasi-uniform cooling and warming. If the annual temperature step were completely dominated by an underlying warming trend, the odds would approach 100%, of course.
Luboš Motl v 6:00 PM
Share