Joule Biotechnologies, with headquarters at 83 Rogers St, Cambridge, Massachusetts is a startup with USD 50 million in its pockets.

It plans to create cheaper fuel than everyone else: the price should be equivalent to less than USD 50 per barrel.

George Church, a Harvard molecular geneticist (see the picture), is among the co-founders: the type of GM organisms seems to be a top secret. It just seems like a new choice, different from other people attempting to do similar things.

Bill Sims is the newly elected CEO and president. 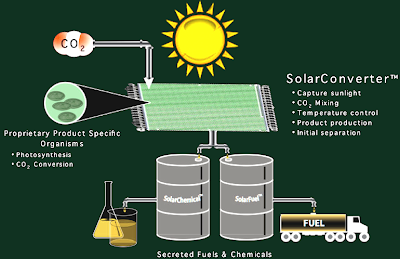 It's not another biofuel company. No agricultural land or fresh water is needed. You need sunlight and (concentrated) carbon dioxide, the gas we call life, but you obtain 20,000 gallons per acre and year (18.71 liters per squared meter and year), an order of magnitude better result than typical biofuels! Because the biofuels are close to the edge of being economically meaningful, you may be sure that this order of magnitude is FTW.


A detail I liked about their website is that I didn't find any references to "climate change". (Wrong! See the fast comments.) After all, if you can get 19 liters of cheap gasoline out of CO2 from each squared meter annually, you are likely to love CO2. ;-)

By the way, some hydrocarbons can be synthesized without the help of life, just with the pressure found inside the Earth's crust, it was recently argued. See also Wired.

Another comment. British archaeologists say that a rise in temperatures by a few degrees - global warming - is what has given the power to the Incan Empire between 550 AD and 1000 AD, after 3000 not-so-warm and not-so-friendly years.
Luboš Motl v 7:56 AM
Share