In the afternoon, we went mushroom hunting to the forests near Obora u Kaznějova, 10 miles North of Pilsen. 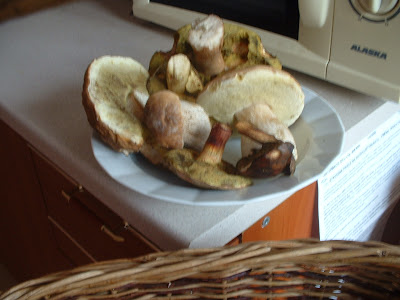 A small abstract of our findings.

Once we parked the car, a worried man told us that he had lost his mother and his small daughter somewhere in the deep forest, several miles from our current location, in an unknown direction. The grandma and the child didn't have any cell-phones. So I operatively took his cell phone number because it was conceivable that we would find them somewhere in the forest.

After an hour, three miles from the previous place, we were indeed hearing some screaming. I followed the noise and as you may have expected, Mrs D. of Starý Plzenec (The Old Quasi-Pilsen City) and her granddaughter appeared in front of my eyes after another kilometer of walking. So we announced the happy news to the Gentleman by the cell phone and directed the women so that they happily met near our car.

As the happy end demonstrates, you have just read the fairy tale about Little Red Riding Hood and her grandmother who got lost while mushroom hunting but they were not eaten by any wolf. Instead, they are going to eat three full baskets of mushrooms. QED. :-)

As soon as we returned to our homes, a terrible megarain (and thunderstorm) just began. Fortunately, it is almost over. Did God reward me for the successful professional operation? Well, I am not sure whether it was God or superstring theory but I found a CZK 200 (USD 11) banknote in the forest, too. 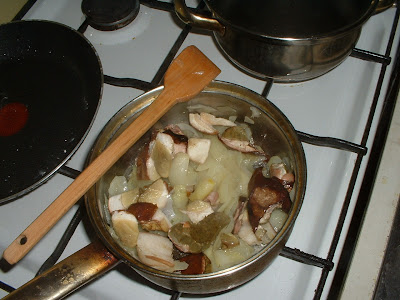 Let me compete with Clifford Johnson's blog, asymptotia.com, for a while. Click the picture to zoom in or click here to see eight pictures (press the right-arrow icon to navigate) how to cook the TRF version of a traditional Czech "smaženice" (roasty girl). You start with onion on oil until it loses its whiteness, add the mushrooms and a bratwurst, and at the end, you add en egg. Ketchup, salt, and rolls and butter are recommended. It was delicious.
Luboš Motl v 5:53 PM
Share