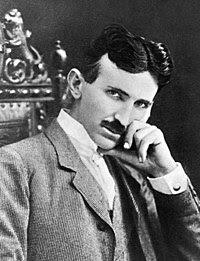 Nikola Tesla was born on July 10th, 1856. He died in 1943. Tesla was one of the most famous electrical engineers in the history.

The alternating current motors were his most important contribution to the Industrial Revolution. But the U.S. supreme court has also declared him in 1943 as the inventor of the radio and Tesla has contributed to robotics, radars, wireless transmission of information, computer science, and - speculatively - theoretical physics.

Back in March 2009, I and my host recorded a program about him for a Czech public radio. Of course, his alleged supernatural abilities were the main topic. The viewers of the Czech television know him from a program called "The Detector" where he was once described as one of the possible originators of the 1908 Tunguska event, besides the extraterrestrial aliens. ;-)

By the way, the pressure from (scientific) skeptic groups led to the abolishing of the program and there are continuing discussions whether such censorship of inspiring nonsense on TV actually helps science or anyone else.

Individual claims about his amazing, science-fiction inventions would require an individual treatment. Some of them may have resembled an artificial ball lightnings, some of them could have been pure fairy-tales, some of them have been scenarios that are still remaining dreams, e.g. ion-propelled aircrafts.

We often think of Tesla as a very applied scientist, an engineer. However, a comment by Lord Kelvin to be mentioned below reveals that Tesla has also been respectable as a theorist. Even more obviously, he was obsessed with theory, too. At least as an amateur, he followed relativity and related developments. By the way, Tesla thought that relativity was first discovered by a Yugoslav - not by Mileva Marić but by Ruđer Bošković in the 18th century! ;-)


When Tesla was 81, around 1937, he announced the completion of a full "dynamic theory of gravity". It was never published so we can only speculate. My guess is that if the paper were ever published, it would show Tesla as a downright crackpot in the field who was inspired by Ernst Mach, as I will mention later.

Tesla, a Serbian American, was born on the territory of the current Croatia, then a part of the Austrian Empire. His father was a priest while his mother was an illiterate woman who was nevertheless able to memorize lots of Serbian poems and make home craft tools.

He studied electrical engineering in Graz where he already focused on the alternating current. When he was 22, he stopped all contacts with his family. In his third year in Graz, he stopped attending lectures, too. His friends thought that he had drowned. Later he worked as an assistant engineer in Maribor, now Slovenia. (To make his links with almost all parts of Yugoslavia complete, his mother had roots in Kosovo.)

In 1880, his father convinced him to study at the Charles-Ferdinand University in Prague (a temporary bound state of the Charles University and Clementinum, created by Ferdinand III in 1654). In Prague, Tesla was influenced by Ernst Mach. But within a year, Tesla's father died so Nikola could stop this school, too.

Tesla was reading a lot. Because he probably had a photographic memory (combined with picture thinking and... some kind of hallucinations), he could memorize complete books.

In the same year of 1880, Tesla moved to Budapest, met another engineer, and as an electrician of a telephone company, he began to build his numerous inventions, including twin turbines for continuous power, telephone repeater or amplifier, the first loudspeaker. After he moved to the Continental Edison Company in Paris in 1882, he added the induction motor and various moving magnetic gadgets patented later in 1888.

In 1884, Tesla arrived to the New York City to work for Edison. The recommendation letter from Charles Batchelor said it well: "I know two great men. You're one of them and I send you the other one." Tesla was hired to redesign all the motors and currents in the company and was promised the equivalent of USD 1 million today. However, after the work was done, Edison told him that the money was just a joke. What a bastard! ;-)

So he started his own company but was removed by the investors who didn't like the alternating current. However, Lord Kelvin was convinced by Tesla in 1893 that the alternating current was the right choice for the Niagara Falls (have you seen Tesla's statue over there?) and in 1896, Kelvin described Tesla as the greatest contributor to the electrical science ever.

I won't enumerate all his engineering inventions: many of them are too practical for me. Instead, let me look at some more general issues.

He was a very special guy, a kind of genius. He never managed to become rich and he died poor. However, he always wanted to be famous and influential. So he was offering his inventions to the U.S. government and others. These were various wireless devices to transfer energy, destroy the enemies' armies, and many others.

It is very clear that he had been working on such ambitious projects and he has achieved certain partial results. On the other hand, it is equally clear that these achievements have been hyped and exaggerated by the laymen who have promoted him to the status of a supernatural creature. He may have had small, six-pound machines that found the right resonance frequency to detectably influence a building. I doubt that he could have actually demolished buildings with it. And I am almost certain that he couldn't have caused the Tunguska event. ;-)

Some imprints in the popular culture

The international unit of the magnetic field (B) is called one Tesla (T).

In Czechoslovakia, we have always known the word "Tesla" primarily as the name of the main socialist electronic company producing all those funny gadgets which practically demonstrated that the Western countries were a decade ahead of the Soviet bloc. Amusingly enough, Tesla the company still exists.

Czechoslovakia was also the only country that gave him the award he deserved - at least our highest Order of the White Lion.
Luboš Motl v 7:49 AM
Share