No Obamamania in Russia 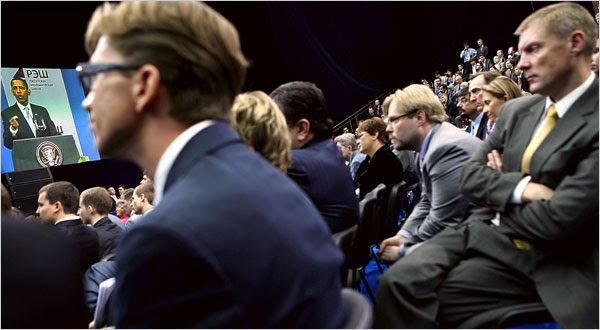 This most pro-Obama school in Moscow has only seen a polite reception and one lukewarm applause at the end.

The New York Times wrote about the low-key reception of Barack Obama and his wife in Russia, a topic that I find very interesting. As Times Union wrote, politics-weary Russia was underwhelmed. Kirill Zagorodnov (25), a graduate of a school where Obama gave a talk, summarized it in this way:


We don’t really understand why Obama is such a star. It’s a question of trust, how he behaves, how he positions himself, that typical charisma, which in Russia is often parodied. Russians really are not accustomed to it. It is like he is trying to manipulate the public.

The newspapers didn't care much where the couple was going. Most people were saying that the main thing they brought to Moscow were traffic jams. He's just another Big Cheese, after all. See also Reuters I, Reuters II, and the Washington Post for similar stories. TPPR offers a possibly deeper speculations on the internal Russian reasons behind the dynamics.


Now, as far as this question goes, I am quite an average Czech, and the Czechs are on the very boundary of the Western and Eastern types of thinking (and the boundary of really high prosperity), if such a classification is possible. So I would almost certainly try to meet him if he came to Pilsen - it's just fun to meet an important guy, regardless of his weird politics, and I usually do prefer the people who are smiling! - but I was certainly not thrilled enough to travel 55 miles to Prague for an uncertain possibility to see him from a crowd. ;-)

Still, the Czech Republic is Western enough so that it could have given Obama the same hysterically excited reception as many other countries. And I think it is basically OK as long as the people who irrationally worship someone won't be bringing their irrationality to the public sphere that influences all of us and not just their fan clubs. I find it OK if fan clubs have the right to show their existence at similar events. A direct impact of fan clubs on politics would be bad.

Well, virtually all the Russians are much less thrilled than I am. While I am more familiar with the Western approach, yes, I do consider the Russian attitude much more rational and clever. He's just another politician and his main virtues that are behind the unusually positive receptions elsewhere are those old, well-known superficial features that are useful for someone to manipulate the people who want to be manipulated by such superficial things - but not too useful for other things. It's as simple as that.

Everyone can choose whether he or she wants to join this kind of worshiping of idols. If he or she joins, it is always due to the influences from the environment. Without the environment, Obama would be just another above-average half-black guy. Well, the people who choose to join the idol worshiping clearly think differently about the world than your humble correspondent does. And if I were asked whether this "different" way of thinking is really more "stupid", of course that my only honest answer could be a resounding Yes. :-)

So I don't really see any rational reasons why Barack Obama is a star. On the other hand, I think that I do understand why he is. But this fact seems irrational to me - a huge example of a group-think. Also, his mixed race seems to be a mixed bag, and I don't understand how almost whole nations can view his mixed race as a positive thing. These nations seem brainwashed to me. Gigantic bandwagons that have forgotten how to think calmly and objectively - and where calm and objective thinkers are being intimidated, even though it occurs without physical violence (that is no longer necessary because most people are cowards who are influenced by much smaller pressures, anyway).

Where does the difference between the reactions come from? Well, I think that the Soviet Union and other socialist countries have done pretty sophisticated things to improve their propaganda methods and to make the citizens join the official bandwagon and to respect the official cults. They had to be increasingly sophisticated because the citizens were increasingly more able to see through the tricks. Today, the citizens themselves are pretty realistic and many of them can see if someone tries to manipulate with them, especially if the methods are too obvious.

The Americans and many other nations seem completely naive in these respects, like little kids from a kindergarten who see a magician for the first time. Naive child-like people may be cuter and happier but they may also do many more silly things.

And it is mostly because of their missing ideological immunity - which is missing because they haven't been exposed to sophisticated enough methods of brainwashing. What I still don't understand is the reason why America has been able to avoid any dictators and totalitarian regimes for more than two centuries, despite its lack of this ideological immunity. Maybe, it has been immune throughout its history and it is just currently losing it? I don't know...
Luboš Motl v 4:51 PM
Share