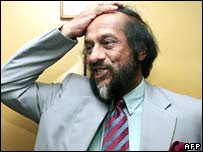 Associated Press and others have reported that Rajendra Pachauri, the IPCC boss, supports India's position that this world's fourth largest CO2 producer should adopt no targets. He also disagreed with the CO2 tariffs that were being planned in the U.S. to launch new protectionist wars.

This coherent attitude of India and other poor countries means that the CO2 targets become virtually impossible. Of course, Pachauri is a hardcore left-wing activist and Indian nationalist and there are many people who would be ready to claim that the CO2 produced in India is innocent while the CO2 produced in the rich world is deadly - because wealth redistribution has been one of the main hidden goals behind the CO2 agenda, anyway. But I guess that these nutcases don't have a majority in the U.S. Senate and other key bodies yet. ;-)

After all, if the carbon restrictions only applied to the rich countries, the result would simply be that the carbon-intensive industries would be moved to the countries that are not restricted, keeping the world's total CO2 production pretty much unchanged. This point seems so obvious that the U.S. Senators who would approve such an unbalanced agreement could be easily tried for treason. More modestly, they would be finished in politics.

The politicians at the European level could support even such a crazy arrangement because they're not accountable for their acts.
Luboš Motl v 8:49 PM
Share