A few days ago, it looked like squatting was going extinct in the Czech Republic. 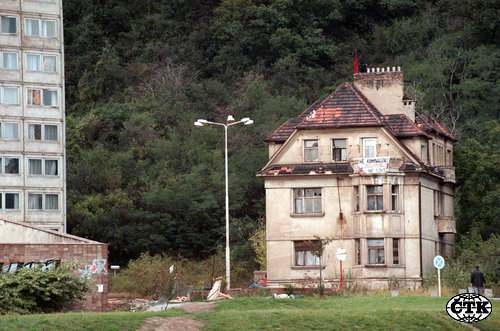 Villa Milada (right on the picture, including one squatting guard on the roof - see more of them: the pretty German woman on the right side loves this particular villa), a building on the boundary between the Trója and Holešovice neighborhoods (map: it's on the former Holešovice Island landfilled around 1900), was apparently the last house they occupied. After years of legal havoc, a well-defined owner emerged and expressed his desire to get rid of the "renters" who never pay anything. After some battles, the building was freed from the occupying forces.

Interestingly enough, you can also see the concrete block on the left side. I have lived there for 5 years, between 1992 and 1997: these are the student hostels of the Faculty of Maths and Physics of the Charles University in Prague. Nowadays, the two tall buildings are reconstructed and pretty (and still able to act as a huge dot matrix). When we're talking about pretty things, here is a fancy "bedroom" inside Villa Milada before it was emptied a few days ago. Click to zoom in: 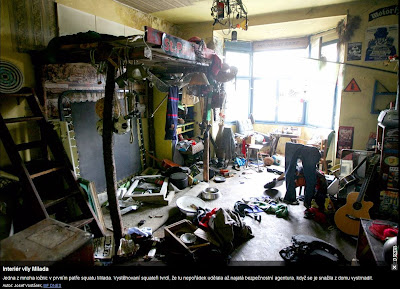 I have never even realized that the adjacent old-fashioned building was a squat. In fact, was it a squat e.g. 15 years ago? Some data indicate that squatters took it over as recently as 11 years ago so I can't remember them. So it's just a theoretical fact for me when I learn that they were making noise and that their "free dogs" have killed a few animals in the nearby Prague Zoo.


After Villa Milada was emptied a few days ago, hundreds of squatters protested, claiming that their right to live in any building is more important than anyone's right to own anything ;-), and the Czech minister for human rights, Mr Michael Kocáb, a very good rock musician from the Prague Selection band (see their songs; add more recent songs of his such as Senescence, With a Strange Woman in a Strange Room) that was mostly active in the 1980s, with a semi-dissident status, did something remarkable yesterday.

He convinced his friend to sell squatters the rights to use his own building in the very center of Prague (11 Truhlářská St, near the Kotva [Anchor] mall) for CZK 1 i.e. for 5 U.S. cents. A pretty good price. The owner plans to reconstruct the building sometime in the future. However, they may use it for an "unspecified" period of time. It's not enough for the squatters. ;-)

Imagine how many people, including poor young single mothers with children, must pay literally a thousand of dollars a month for apartments in this area. No one can help those people: they're the bulk of the economy who are needed for the market to quantify the proper rent in a sensible way. But the squatters are a lucky species, indeed.

Besides squatters, "freegans" are another class of freeloaders. The newest episode of The Goode Family, Freeganomics, was dedicated to this phenomenon. See also a review.

A few months ago, Google has sent its vans to map the streets of Prague: the Street View of our capital will be available later in this year. Also, Google Earth now contains (not quite perfect) 3D models of pretty much all buildings in Central Prague (don't forget to erase your cache) which was chosen for its special value. The new squatting headquarters are located just 100 meters from the very expensive area covered by the 3D models.

In this world, one can indeed live a much more comfortable life if he is a member of one of these parasite groups than if he actually creates some values. What do you think that will happen with the society when this subtle anomaly becomes well-known to everyone? ;-)
Luboš Motl v 6:32 PM
Share