Czech president Václav Klaus has summarized his experience with the other EU politicians. 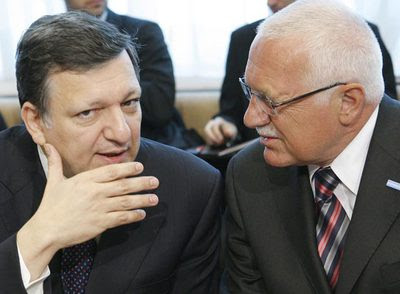 In fact, he has also said some nice words about Barack Obama. Despite Klaus's extremely meagre expectations and despite their diametrically opposite ideologies, Klaus was always immensely pleased and surprised by conversations with Obama.

However, people like Jose Barroso, Javier Solana, and Angela Merkel didn't do so well. Their speeches are made out of empty formalities. They were probably written by their aides and the propositions don't logically follow from each other: they speak "ptydepe" that drove Prof Klaus up the wall.

Ptydepe is an artificial language invented by playwright Václav Havel, who would later become a prisoner and a president, in his The Memorandum (1966). Havel's brother, computer scientist Ivan Havel, actually helped Václav Havel to design it. It guaranteed the happiness of everyone by making sure that the words are never too close to one another. The language is cool, for example:

This text roughly says that the translation doesn't exist or shouldn't be reproduced. Because no one has ever learned "ptydepe", it became a synonym for the meaningless jargon of bureaucrats, despite its original well-definedness. ;-)

Angela Merkel can't be charmed and she lacks the inner compass for ideas that Thatcher used to have. Moreover, it seems that she hasn't lived in communism: at least, she has learned nothing from that era.