Some pure astronautic entertainment. What would you expect from the 3000th posting on this blog? ;-) 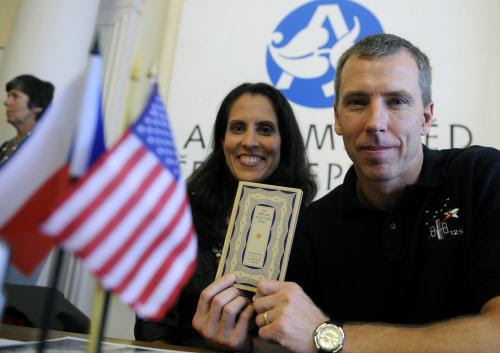 Andrew Feustel, the last man who touched the Hubble Space Telescope during the recent service mission in May 2009, brought Jan Neruda's astro-emotional (Czech) poems, Cosmic Songs (1878), to outer space and back to Czechia.

He wants to fly to the Moon and Mars or beyond. Aden, his 13-year-old son, prefers to stay on the Earth unless a flight to the "scary outer space" becomes necessary. And let me tell him: it probably won't. ;-) The 15-year-old Ari is less hostile towards our broader cosmic environment.

Andrew Feustel revealed his goals today, during his fifth trip to my hometown of Pilsen where the uncle of his wife, Indira, surprisingly lives.

"Pilsen is a beautiful place, we like to stop here whenever we go to Germany. During our recent mission, we didn't have good enough position to see the Czech Republic, so at least I have tried to spot the Pilsner brewery."

OK, I improved the answer a bit.

While Feustel could say "chata" [khuh-tuh] (cottage), a place they visit here, his wife (who has Czech roots after her mother and Indian after her father) remembers Ferda the Ant as well as Spejbl and Hurvínek, two famous series of Czech books and/or theater comedies for the kids. Because she also spoke to her friend by phone, she can create Czech sentences and listen to us.


Feustel was decided to become an astronaut when he was four years old. ;-) For obvious reasons, he finds manned missions useful. And I would say that with the Hubble Space Telescope, he may have shown that his work was useful, indeed. Maybe I should avoid these heretical remarks because I may meet Steven Weinberg tomorrow. ;-)

The astronaut had no problems with the fact that they will have to use Russian Soyuz rockets. The Czech translator needed some help to translate "space shuttle" to Czech ("raketoplán") but on the other hand, he managed to translate the word "Russian" as "Soviet" many times. :-)

After Prague and Pilsen, they will also visit Brno and Znojmo in Moravia (Southeastern Czechia) where additional relatives of theirs live.
Luboš Motl v 5:30 PM
Share