The Chamber of Commerce wants a trial with AGW

The United States Chamber of Commerce, the world's largest not-for-profit business federation (or "lobby") representing 3 million businesses, is afraid of the intent of some politicians to hurt the business by carbon limits and they want to put the science of global warming on trial:

What they imagine is a Scopes Monkey Trial of the 21st century. Well, in my humble opinion, it is not the most flattering analogy. The Scopes Trial (Tennessee, 1926) led to the temporary verdict that it was illegal to teach Darwin's evolution at state-funded schools. ;-) 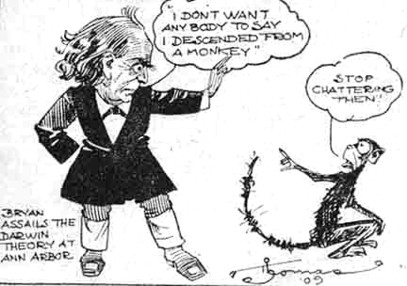 I don't know whether most of the officials of the U.S. Chamber of Commerce believe in creationism. But if the analogy is supposed to go too far, it surely hurts their case. After all, the analogy is upside down. The key mechanisms of climate change are natural, not man-made, much like the key mechanisms behind the origin of species.


Brenda Ekwurzel, a crackpot with the Union of Concerned Scientists and one of the sore losers in the debate about climate change, has a better idea about the right analogies and her role in them. The proposal "brings to mind for me the Salem witch trials, based on myth," she says. There may be many other myths but her following sentence shows that she's a witch, anyway: "In this case, it would be ignoring decades of publicly accessible evidence." ;-)

Today, the EPA, the likely key defendant as the main official body that would be responsible for crippling the U.S. economy, will be officially told today that a trial-style public hearing, which is allowed under the law but nearly unprecedented on this scale, is the only way to "make a fully informed, transparent decision with scientific integrity based on the actual record of the science."

Well, I surely don't think that theaters in the courts are the best way to make scientific progress - and the Scopes Trial is just another example that judges may be very wrong, too. But what I do think is that courts may be helpful if you have to deal with some organizations or people who don't behave honestly and who are ready to hurt others in their own attempts to benefit.
Luboš Motl v 7:12 AM
Share