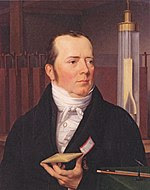 Just like his brother, he received most of his education at home by self-study. And he was an achieved poet and writer. But we primarily remember him as a physicist. Ørsted believed in the unity of Nature which is why he instantly accepted Johann Wilhelm Ritter's speculations about the links between electricity and magnetism, despite the lack of evidence.

The most important story of his life occurred on April 21st, 1820 when he was preparing a lecture. An electrical circuit managed to move the needle in a nearby compass. Ørsted became the first famous person who produced a magnetic field by a time-dependent electric field: the first guy who actually managed to observe this effect was Gian Domenico Romagnosi who saw it 2 decades earlier but Romagnosi remained virtually unknown.

Ørsted's qualitative discovery was later upgraded into a mathematical, quantitative law by Andre-Marie Ampere. This effect shouldn't be confused with the electromagnetic induction which is the creation of an electric field (or voltage) by a time-dependent magnetic field and which was found much later. Note that the influence goes in the opposite direction.

There's one more cute meme that Ørsted should be credited with: he was the first physicist who began to produce gedanken (thought) experiments en masse and who gave them the name. Theoretical physics would advance at a much slower pace, if the progress were not completely impossible, without this technique.

This Danish physicist was also the first man who isolated aluminium as an element.
Luboš Motl v 10:42 AM
Share