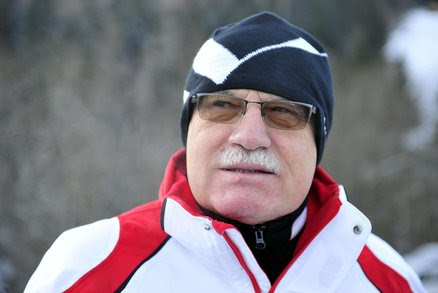 Two days after I was defending The New York Times in a discussion with Noel Shepperd, the paper decided to prove me wrong. The article

resembles the texts about Václav Havel and other dissidents we used to read in Rudé Právo, the official Czechoslovak communist daily.

Dan Bilefsky and Stephen Castle make it very clear that they have no clue what democracy or fair journalism mean. They expect all their readers to think that Václav Klaus is a villain while the typical Eurocrats are great guys. For NYT readers, it is apparently politically incorrect to realize that the truth is the opposite one.


Be afraid, be very afraid.

In the first paragraph, they wrote that Klaus has "stunned" EU diplomats when he gave them copies of his Blue Planet in Green Shackles. Why? Because the book denounces the "fight against climate change". This fight against a law of physics is described as "a central policy of the 27-nation bloc he was supposed to lead".

Oh, really? When did it become "a central policy"? Which vote has decided about such an outcome? Which constitutional document defines it as a central policy? How could it have been a central policy in May 2009 if the #1 EU leader (and about 89% of his nation) knew and knows that it is a pile of crap pushed forward by self-serving ideologues, lazy politicians without any ideas who want to offer cheap and unverifiable promises for the far future (and to unify the irrationally scared electorate under their leadership), and politicized scientists who fight for greater grants? Or are policies supposed to become central across continents without any votes?

Sorry, according to the actual legal status quo, the "fight against climate change" is not a central policy but a perverted group opinion of a large group of arrogant people who don't have to be taken seriously.

The New York Times also tell their readers that they're obliged to think that Lithuania and Estonia are more important than Russia and Klaus is a heretic if he seems to disagree with such an assumption. ;-)

According to the "journalists", the greatest crime of the "villain" may be to "bring the postwar project of European integration tumbling down" by rejecting the Treaty of Lisbon. Oh, really? Does The Treaty of Lisbon define what the postwar Europe is all about? Are they talking about the same incoherent mutation of chaotic hundreds of pages of the rejected European Constitution, an equally meaningless pile of Eurospeak whose goal is to make self-elected European bureaucrats able to decide about the European citizens' lives so that the individuals as well as their elected national representatives may be circumvented at any moment?

The authors of the NYT rant add a lot of additional attacks against Václav Klaus, the Czech Republic, its presidency, as well as the legitimate decisions of the Czech Parliament. They also write lies about the relationships between Klaus and Topolánek which have always been cool but they have always obeyed all the necessary rules and etiquettes.

Also, the Czechs - starting with Topolánek - are painted as heretics because they think that they can make fun out of hell (yes, we can!). They praise Nicolas Sarkozy for being an impolite jerk, when he refused to eat an excellent Czech lunch (national cuisine par excellence) and asked for a dull omelet instead. But the most characteristic paragraph that summarizes the authors' understanding of democracy is the following:


Indeed, throughout their presidency, analysts say, the Czechs — and not just their intransigent president — failed to appreciate the difference between speaking for themselves and representing the bloc as a whole.

I have heard the same scary crap during the Summers wars at Harvard and in many other contexts. So let me clarify it.

The very purpose of the institution of rotating EU presidencies is - and has always been - to give the individual member states a tool to influence the evolution of the union for six months and to show their actual preferences and values during the same period. That's a natural quasi-democratic policy that may partly help the EU to avoid the formation of powerful "cliques" that control everything even though bulk of whole countries actually disagree with the dynamics. Yes, this institution should also be canceled by the Treaty of Lisbon but the latter is not a valid law at this moment and it's unknown whether it will ever be one. So it is very dishonest to act as if this document were a law.

After the resignation of the government in March, Václav Klaus became the most important leader in the country that was holding the EU presidency. More generally, the ministers became the EU-level leaders of their resorts, too. All these Czech politicians have been democratically elected and the very goal of their chairs is that they are supposed to do politics, e.g. to influence the public issues according to their own political programs, within the mantinels defined by the law and by their limited powers.

That's what all these people were doing all the time.

When some people become leaders of Europe according to the EU's own rules and/or leaders of resorts in Europe, there exists a simple reason why they don't "appreciate" the difference between speaking on behalf of their nations, which is what they were allowed to do by their national elections, and speaking on behalf of the EU. The reason is that the difference doesn't exist.

By the very rules of the EU and democracy, these people have been given the right to informally speak on behalf of the bloc - in the very same way as Mr Sarkozy was doing half a year earlier, without igniting any criticism from the PC "journalists" with double standards. Why didn't we read the same criticism directed against Mr Sarkozy, the "energetic" chap who collapses after 200 meters of jogging?

Fortunately, it's not true that everything that (any) politicians ever say instantly becomes a law, but they surely don't lose any of their freedom of speech - at least, in the Czech Republic they certainly don't (that's one of the greatest achievements of the Velvet Revolution) - and they don't lose the right to defend the political goals that they find valuable.

In the very same way, Lawrence Summers had been named the President of Harvard University in 2001. That meant nothing else than the fact that he had gained the right to influence the direction of Harvard according to his own visions, as opposed to the visions of the frigid whining obnoxious feminists, the professional blacks, and other unfair freeloaders who are "actually" in charge of everything, regardless of the "puppets" at the top (which is how it indeed works most of the time, but it should not).

The authors of the NYT article have a very different idea about democracy: all elections are just puppet shows and all politicians are and must be just puppets because the important questions must actually be decided behind the scenes by some (politically correct) shadowy creatures from the "Big Party" (and everyone must know what they actually want and what is right!) who must remain completely unaffected by the opinions of the elected officials and the people whom the elected officials represent. If someone disagrees with the "Big Party", he should be attacked in the nation's leading newspapers and everyone else should be obliged to fight against him.

While the authors tell us that democracy must be fake, they make it equally obvious that all perceptions should be illusions, too. That includes the feeling of unity:

The fact that he was one of Europe’s top representatives at the height of the global economic crisis reveals the difficult trade-offs made to achieve the semblance of unity, as well as the limits of Europe’s clout.

They think that a main goal of Europe is to achieve a "semblance of unity". That's very nice but if there's no unity, anyone who tries to achieve the "semblance of unity" is a hypocritical liar and demagogue. There were demonstrably many European politicians (to avoid expletives) who disagreed with the EU leader Klaus which meant that there was no unity concerning the "crisis" or "global warming". By the way, once the NYT writers kindly accept that many (or most) Europeans don't think that Europe should be a "country" i.e. a "superstate", it's meaningless to talk about "Europe's clout". Different nations, interest groups, and individuals have different goals so they want different kinds of "clout". And different contexts require different ways how to "sum up" the clouts of Europe's components.

While the U.S. is basically a country of one culture, one language, one history (of one former British colony that has assimilated everyone who came there), and one universal set of politicians who matter the most, Europe is a continent with dozens of very different nations with different histories, different historical experience, separated national media, and local politicians who think separately and try to be elected by their nations only. There is no analogy here. Moreover, many of us consider e.g. America (and the American revolution) closer to us than many/most of the other EU members (and the French revolution). There just don't exist the prerequisites for a common identity that would become more important than the national identities.

But let me return to the hit piece in The New York Times and summarize it. The New York Times should be ashamed for showing their pornographically Stalinist would-be journalists, Dan Bilefsky and Stephen Castle, to the public. And the citizens of the New York should kick these dirty bastards into their butts.