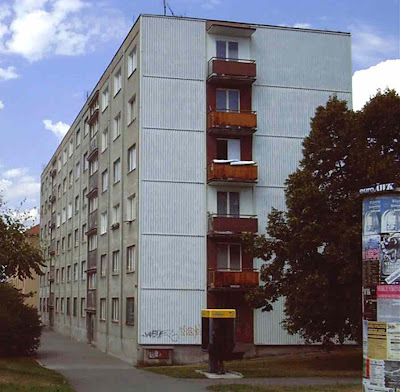 And this is how it looks today, after a three-month renovation and heat insulation (it is packed in a 10-cm polystyrene layer, too): 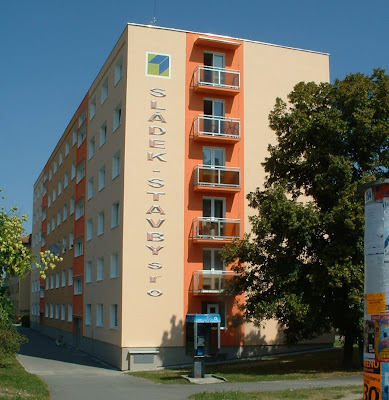 I think it is prettier, more friendly, more human, happier, and the neighborhoods are more diverse now. The other inhabitants - including many pensioners - were more conservative concerning the colors: I would prefer much wilder colors and pictures but it's OK with me. The modest advertisement made the contract cheaper by USD 10,000+ and it's pretty cool, too.

Concrete blocks were the main contribution of socialism to the field of architecture. Literally hundreds of millions of people were placed in these panelák's or "rabbit hutches", as ex-president Václav Havel called these boxes composed out of a few gigantic "bricks" ("panels" in Czech). ;-)

It used to be speculated that they would collapse within a decade or two. But you can see that with some creative and transformative forces of capitalism, things are not that bad and the fear may be forgotten.

Much of the three-month work was done by the Ukrainian construction workers. The most active one told me that he had to pay some money to his Ukrainian "mafia boss" - who is responsible for some paperwork - but the things are probably not that bad because he earns CZK 32,000 (USD 1,700) per month after this subtraction - 50% above the average Czech salary. He surely deserves it.


In my opinion, the inflow of predominantly Ukrainian and Vietnamese workers to Czechia is very useful for our economy and for our society. While the Ukrainian guys love to build houses and do similar work, the Vietnamese are retailers and own a lot of restaurants and other businesses.

They're a clear economic plus and they seem to be highly compatible with the local culture and habits. And it's just fun to see the Vietnamese children who speak better Czech than most of their all-white friends: we couldn't see such things in the previous millenium. ;-) My opinion would obviously be very different about other hypothetical ethnic groups of immigrants that would be less compatible and that would swallow a lot of money from the public budgets.

You may want to see my

I will add scaled-down versions of the 150 pictures to that directory.

Skydiving into a black hole

As my Facebook friends and contacts know, Tereza Nvotová kindly made me undergo my first tandem jump on Sunday - I mean parachuting. 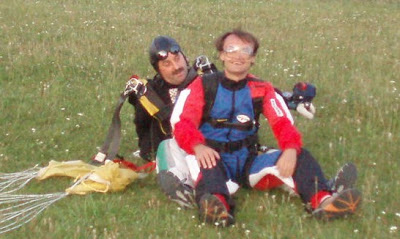 As you may expect, all the ugly features of your humble correspondent are being amplified so I am not going to promote this visual portion of the experience much, even though I have a lot of pictures and video material. :-) But it's a great feeling of freedom, although the pressure gradient (poor ears!) and wind strength is too much of a good thing.

Walter, my tandem partner who has had 10,000 jumps, did a great job. He had to keep me in the air for a very long time, while we were falling from those 4 kilometers onto the airport near Czech Cologne in Eastern Bohemia. It's because I had another hard task assigned by Tereza that has paid for the jump: I had to give a lecture about the black holes in the air. ;-)

Fifteen minutes of debates with an experienced young skydiver about quantum mechanics in the aircraft won't be discussed here - but it was pretty hard to talk in the noise.

In the air, I had to answer three questions by Tereza who formulated them during her own jump, also the first parachuting of her life. ;-) The three questions were 1) what are black holes, 2) what you see when you fall into it, 3) whether they're similar to the nothingness from The Neverending Story. ;-)

So I answered much of the first question, and began to answer the second one. So we were getting closer to the event horizon, and the strategy was to show that some information about my perceptions would never get out of the black hole even though these perceptions were very real - up to the huge tidal forces that destroyed me near the singularity (Walter helped me to make it really dramatic).

But as you might expect, Nature is very strict about her basic principles - even when you only try to mimic them. :-) So my great answers about the tidal experiences and nothingness actually didn't escape from the black hole: approximately when I was crossing the event horizon, the battery of the camcorder died and the camcorder stopped.

If you're nevertheless interested in my great answers to the questions 2) and 3), you will have to decode the Hawking radiation which may be hard. :-)
Luboš Motl v 1:06 PM
Share