Silence of the hurricanes 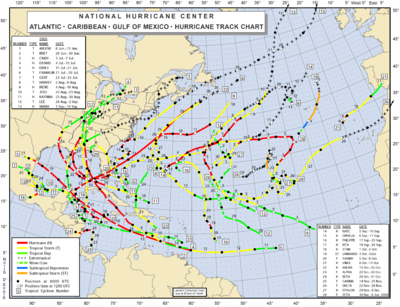 This map looks like the New York Subway but it is actually a map of the tropical storms.

What do Arlene, Bret, Cindy, Dennis, Emily, Franklin, Gert, Harvey, and Irene have in common? Well, they're named tropical storms that occurred by August 4th. Nine of them.

Except that we have moved on. It's 2009 and we don't hear that the current hurricane score symbolizes the future trends. The reason is simple. The number 9 in 2005 dropped to 0 (in words: zero) in 2009. See the 2009 Atlantic hurricane season. The total damage, fatalities, and ACE have been uniformly zero as of today.

It's obvious that a big hurricane is able to create a higher number of newspaper articles than the absence of hurricanes. Nevertheless, if a journalist only reports the events of the first kind and expects the readers to generalize them, he is being either stupid or dishonest.


The outcome of any sensible analysis of the tropical storm numbers is very obvious: there's no clearly detectable change in the number and strength of the tropical storms. All the articles that have ever been written about the SUVs' possible impact on the hurricanes have been complete bunk and all the journalists whose salary ever depended on a similar kind of news are fraudsters.

Just to have an idea, the first named storm of the Atlantic hurricane season emerged on the following days:
I will stop here.

You can see that 2009 has broken the record in the "latest first named storm" discipline at least since 1994 and probably much earlier. That's why you won't read much about the 2009 Atlantic hurricane season, and if you will, there will surely be no suggested links with the "climate change". Reuters just dryly tells you that the Colorado State University hurricane group had to lower their predictions for the third time this year today. No speculations are added in this case. Hurricanes were the "climate" in 2005 but now they're just "weather", aren't they?

You know, the producers of SUVs and the managers of coal power plants, among others, could also argue (if they were the same jerks as the green activists) that their work is essential for the safety of the mankind - and they should be getting trillions of dollars in subsidies and bonuses from the government - because by producing carbon dioxide, they're not only improving the agriculture but they also reduce the number of dangerous tropical storms.

The former would be right while the latter would be a bogus statistical speculation that would only differ from the popular "bad hurricanes from CO2" story by the sign.