Yesterday, I spent a day in Prague, on a congress of mathematical physics, thanks to the hospitality of Miloš Zahradník, my (former) diploma advisor from Prague who was a co-organizer and who showed me a new concise version of a Taylor series problem we used to solve in different ways (why exp and ln are inverse to each other: permutation edition) and invited me for a lunch.

I've seen about seven talks, starting from Steven Weinberg's talk on asymptotic safety (and the history of QFT) that we have already discussed (Lenny Susskind asked most of the questions), continuing with various talks related to statistical physics, and ending with three talks about "science and society".

They were delivered by Joel Lebowitz, an ex-teacher of mine from Rutgers (who survived holocaust but that couldn't prevent him from doing a lot of great stuff for the human rights of scientists intellectuals across the world).

Šimon Pánek, a top student leader of the Velvet Revolution, gave a meaningful talk about the activities of their "People in Need" NGO, as well as memories about the fall of communism. It didn't hurt that he thought that physics was studied by physicians :-) and that the November 17th, 1989 demonstration he led was remembering a 1942 rally (rather than the correct answer: 1939).

And an African scientist whose name is somewhat difficult for me to reproduce told us everything about mathematical physics in Africa: it didn't exist before 1980 and since that time, the number of people on the black continent who are interested in such things and who attend various summer schools etc. increased from 30 to 50 or so. There were many names of the institutions from the (white) "North" who help them - but otherwise the talk wasn't bad. ;-) 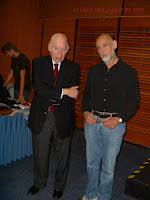 I may add a lot of details later but I am busy right now. The picture of Lenny Susskind and Steven Weinberg on the left side (click to zoom in) appears because they haven't managed to disagree with its emergence yet, and I hope they won't. ;-) In fact, here you can see

of the Clarion Congress Hotel where the event took place and other things related to the event (press the right arrow button to browse). For Vysočany, a colorless industrial neighborhood of Prague, the building looked impressive to me.
Luboš Motl v 11:16 AM
Share