The LHC is not yet operating - it will begin in mid November, with reduced-energy collisions added a few weeks later - but the CERN director, Rolf-Dieter Heuer, already wants to build a new linear collider at CERN.

In his modest office with a socialist-style furniture, he also explains the difficult cleaning procedures and even more difficult preemptive policies. Heuer is optimistic about their control over the LHC which seems much smoother than LEP (the previous Lot of Extra Problems collider) even though LEP was simpler. 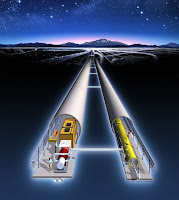 In a few years, the LHC will have years of experience of running at 14 TeV, he says, plus important discoveries, he hopes. Also, the European-American symmetry has been spontaneously broken and people suddenly come to CERN. ;-) Heuer thinks that science needs global, continental, as well as national projects to preserve the expertise of the people.

CERN has the capacity to host the International Linear Collider (ILC) or the 3-TeV, 48-km Compact Linear Collider (CLIC; and click the word haha): see the picture. But competition is always welcome, Heuer says - as long as the symmetry is broken and others have no chance. ;-)


In a separate interview, the CERN spokesman James Gillies explained that the launch of the LHC was not overhyped. The genuine interest was everywhere - for example because people were afraid that the world would end. So they have just accepted this interest. ;-)

Gillies has a clear recipe how to fight against those physics bloggers who spread the rumors about the Higgs and other discoveries and who parasite on the laboratory's achievements. The recipe is to be faster than they are. We will see whether this plan will work not only for the physics blogs but also for The Reference Frame. ;-)

(Well, I have personally found the quality of the particle physics rumors on the blogosphere to be lousy - everything I remember has been crap - so I will happily keep on preferring official releases.)