If you remember, ESA launched Planck in May 2009. Four months later, we have the first images that should eventually (after six months) supersede the well-known WMAP images. BBC and others report. 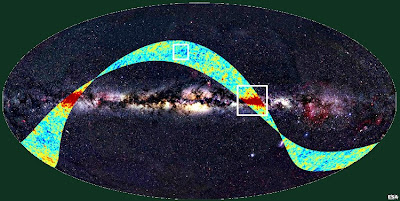 Click to zoom in. The temperature variations measured by Planck in nine frequency ranges are depicted inside the strip, by the usual WMAP-like mottled colors.