Last week, Yugratna Srivastava, a 13-year-old Indian girl, was hired by the United Nations to present a poem to the world's leaders and the humanity.

In the tradition of Nazi and Soviet methods of propaganda, a kid was asked to explain that our world is gonna fry unless everyone buys all the ideology and policies that her propagandistic employers wanted her to disseminate.

There apparently exist adults whose skulls are comparably unhinged. The girl wasn't strong enough to convince the world about the looming catastrophe - and they need much stronger "momentum" for the Copenhagen negotiations that should efficiently cripple the world's economy.


So most of the media, such as The Telegraph, have informed about a "research" of the British Met Office. These guys - no longer stupid girls from third-world countries but paid "expert" adults from the U.K. - predict 4 degrees Celsius of warming by 2060. I kid you not.

You may wonder why those articles in the media don't contain any graphs. Well, here is how the graph of the UAH MSU global temperatures between 1979 and 2059 has to look like, in order to support the claims in the media: 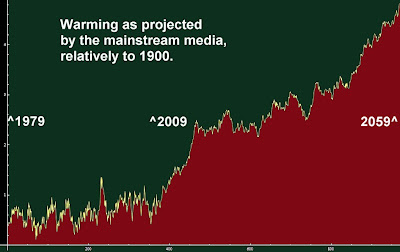 I created the graph from the existing 1978-2009 data of UAH MSU combined with a Brownian noise that leads to the right difference between 2059 and 2009. Try to create your own graph. You won't be able to find one that looks more sensible than the graph above. Do you really believe that it is conceivable that the UAH graph that the people will have in 2059 will look like the graph above?

Clearly, the graph above shows that Nature was changing the temperature by a little bit between 1979 and 2009. But it suddenly lost Her mind in 2009 and started to warm up. Why did She stop obeying Her own laws? And how much more quickly will she warm up? Well, the net UAH warming between 1979 and 2009 has been around 0.4 degrees Celsius. If extrapolated, and such extrapolations of violent short-term trends are likely to be overestimates, that would produce 0.6 degrees Celsius by 2060.

Their figure, 4 degrees Celsius, exceeds this extrapolated figure by a factor of seven, despite the approximate constancy of the CO2 production since 1979. In reality, the warming by 2060 will almost certainly be smaller than 0.6 degrees Celsius.

These people must think that all the other people have the IQ of a pumpkin to buy such manifest nonsense. If they overstate the measured warming trend by a factor of seven, do they think that no one will notice? Why should Nature suddenly change a quantity - the decadal warming trend - by one order of magnitude relatively to all existing measurements and all sensible theories? Do they really believe that anyone but corrupt people trying to steal billions from the taxpayers, and/or mentally retarded individuals are ready to buy this crap?

Their projections are exactly as ludicrous as the "judgement day" warnings by the Jehovah's Witnesses. The only difference is that the Met Office religion lacks the tradition, even the short tradition of the other sect.

Click to zoom in. Another extrapolation of UAH MSU to 1979-2059. If you had to make a bet - your house - which projection among the two graphs you were offered would you expect to be more likely?
Luboš Motl v 7:13 PM
Share