Klaus: Is there a common European idea? 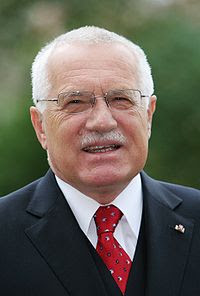 I am thankful for the invitation to these inspiring "Passau Dialogues". And I happily add that it is an honor to be given the opportunity to lead a discussion with such an important personality of contemporary Europe as - beyond any doubts - cardinal Schönborn surely is.

We will certainly discuss neither the details of the church orthodoxy - in which I wouldn't be an appropriate partner - nor the ever returning questions about the relationships between the state and the church. Also, I will avoid temptations to offer alternative hypotheses about the origin of the financial and economic crisis or similar topics of my discipline, the economic science.

The question chosen by the organizers for the today's debate - Is there a common European idea? - is seemingly an accessible topic for almost anyone because it doesn't require any deep expertise in any specific scientific discipline. However, it can be said equally well that it is a topic for no one. Almost no one has the credentials to grab it, almost no one can claim to have comparative advantages for discussions about it. Nevertheless, such "advantages" surely don't belong to the people who consider themselves to be great Europeans exclusively because of their having forgotten where they have come from, people who are indeed living a genuinely European life - with breakfasts in London, lunches in Warsaw, and dinners in Lisbon - thanks to the generosity of the EU institutions.

I should probably reveal that as the date of our ongoing meeting was approaching, I began to be surprised where I had found the courage to participate in this debate - moreover in the German language. However, at the very beginning, I feel the urge to dare to say that I think that the today's event is based on a wrong assumption, namely the assumption that our continent has an idea, if it doesn't have one, then it should have one, and that the only remaining problem is to decide whether we already know the idea or whether we will learn the idea later.

It would be nice if I were not misunderstood. None of us is questioning that as the time was ticking, the European civilizational space was created, with its Judeo-Christian roots and with its understanding of the human rights and freedom which differs from certain other regions of the world such as Asia. Our Western, Euro-American civilization was built upon these pillars in the form we know today. If we were asked to find its greatest common denominator, its main characteristic (which is not quite an "idea", I think), I would choose the notion of freedom. I would choose it while realizing that North America couldn't get distinguished from Europe by this concept.

That's one issue. Another issue is that during the most recent decades, our continent was a witness of a political or rather social-engineering attempt to build an artificial construct called the European Union. In my opinion, however, this attempt, which is another chapter in the efforts to unify Europe, contradicts the original principle (or "idea") of Europe which is freedom. That's the core of my well-known doubts about the current evolution of the European integration.

Europe is certainlyThat's why Europe cannot have historiography. I consider the contemporary process of writing European history textbooks to be a falsification of the history and an effort that is too obviously purpose-built. Europe doesn't have any commonly shared memory: the latter is being artificially, ex-post, constructed by the writers of these textbooks.

When I am saying all these things, it doesn't imply that in the European space, it is impossible to struggle to find a rational, pragmatic construct created by the people, a European Commonwealth or a European Union based on the supervision, control, or execution of certain selected shared activities from one center, a shared execution that is based on the agreement of all sides. In Europe, we can surely find some "public domain" or commonly shared values (although the latter can't create the searched-for European idea). That's why I view the institutionalization of Europe based on the ideas of the contemporary champions of Europeism to be misguided (see my text, "What is Europeism?", MfD, April 8th, 2006).

A completely different question is whether a concept or a system of ideas (some belief) - either a religious belief (such as Christianity) or a secular belief (freedom, human rights, humanism) - used to have or still has the ability to integrate Europe, i.e. whether it has a "Europizing" effect. It may be the case. And if Mr cardinal is going to advocate this opinion, I won't disagree.

I am happy that I can live in Europe and that I belong to Europe. For me, Europe is one of the reference frames of my life as seen from its spiritual and cultural dimensions. That's not a modest role. But it's nothing more than that. Europe not only fails to have any common idea: it can't have one and it doesn't need one.

* Please allow me to paraphrase Margaret Thatcher who has once intensely excited her listeners by the proposition that "there is no such thing as society". I would symmetrically add that "there is no such thing as Europe". However, she and I meant the sentence in one very well-defined, and (for me) quite conmprehensible meaning: "Europe is not an independent operator in human affairs."
Luboš Motl v 1:12 PM
Share