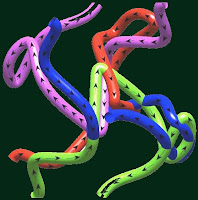 Science Magazine has published a paper by 14 British and German authors,

who claim to have seen, via diffuse neutron scattering, emergent magnetic monopoles in a spin ice on the highly frustrated pyrochlore lattice.

These magnetic monopoles appear at the ends of "observable Dirac strings". This is way too bizarre a terminology, to say the least, because a basic defining property of the Dirac strings, as realized by Paul Dirac, is that they must be unobservable! ;-) OK, fine, they mean some magnetic flux tubes that actually don't respect the Dirac flux quantization rule.

Let me say a few words about the Dirac strings.

If you imagine a magnetic monopole of charge Q, i.e. an isolated North (or South) pole of a magnet (that is normally coming in the dipole form - with both poles - only), the magnetic field around is radial and it goes like "Q / R^2". Remember the letter "Q". The vector function "(X,Y,Z)/R^3" in three dimensions has the feature that its divergence equals zero. Well, not quite: it is a multiple of a delta-function.


Consequently, the magnetic field "B" may be written as "curl A" using a vector potential "A" almost everywhere. But you must remove not only the point where the monopole is located but also a semi-infinite string from this point to infinity.

The monopole may therefore be visualized as a very long dipole magnet - or solenoid - with one end moved to infinity (where its existence becomes unobservable). Because the infinitely thin solenoid must also be invisible for us to be able to say that we only have the monopole, there must also be no Aharonov-Bohm effect around this solenoid. This implies the Dirac quantization rule, namely the condition that "Q.e" must be a multiple of "2.pi" for all electric charges "e" of isolated particles (that orbit around the solenoid).

Because the fine-structure constant of the electric force is small, "1/137.036" or so, the corresponding elementary magnetic charge must be large, with its dual fine-structure constant equal to 137.036 up to powers of "2.pi" and "4.pi". Also, the theories that can actually predict the existence of fundamental magnetic monopoles and their properties, usually estimate their masses to be near the (very high) GUT scale, so they can't be produced by colliders (or in labs).

Don't get carried away: this German-U.K. work is not gonna transform particle physics even though we might like it. ;-) The total magnetic charge of the whole material is exactly zero and moreover, the magnetic flux tube in between the two poles is still observable even though it got pretty thin. The observed flux tubes would only deserve the name "Dirac string" and their endpoints would only deserve to be called "magnetic monopoles" if the flux tubes became unobservable - which is only partially realized here.

Of course, the magnetic monopoles seen by these experimenters are just quasiparticles, not true elementary particles. In condensed matter, many kinds of bizarre quasiparticle phenomena are possible. The most catchy ones include the fractional charges (in fractional quantum Hall effect), the separation of the spin and the charge, and now - if the paper is correct - the magnetic monopoles.