Pictures from the anti-Obama rally in D.C.

This is not a full-fledged article. But Ross Hedvíček of Florida posted pretty cool pictures of the anti-Obama rally in Washington D.C. that took place a week ago or so.

Click the picture above to get to the article ("Comrade Obama has only been caressed in Czechia") to see many more photographs like that. About a million (more pix!) of witty people of all races, ages, and sexes attended the rally but only the protester above has won the Rally TRF Hottie award. Congratulations.

Climate in the U.N.

By the way, there was a climate meeting somewhere in the New York City today. Its purpose was for Prof Václav Klaus to teach his students, other politicians, something about the society, economics, politics, and their interactions with science, taking the global warming hoax as the main example.

But most of them are bad students so they were far too distracted by pornographic thoughts so they didn't learn almost anything. For instance, a little Nicolas has proposed one more intercourse with his friends in November.

The media are pretty much full of their pornographic thoughts.

The Guardian, a British socialist daily, decided that Obama can give a bad, awfully ho-hum, speech, too. 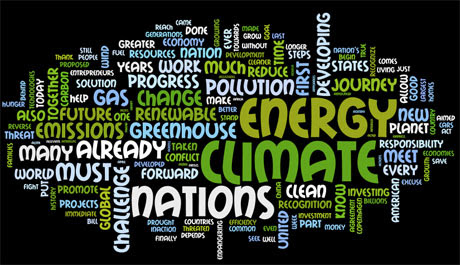 Yes, that's the speech. The ordering of the words is pretty much irrelevant so you don't have to watch the video with the hogwash. Reuters managed to publish some sensible information about the meeting in the article called

The president said: "It was sad and it was frustrating. It's a propagandistic exercise where 13-year-old girls from some far-away country perform a pre-rehearsed poem. It's simply not dignified."