Obama Needs to Give a Climate Speech - ASAP

in which Marc Morano and Barack Obama are credited with the gradual fall of the climate hysteria or, if you want to use the original wording, with the "growing defection of experts from the scientific consensus view". ;-) You might think: What a strange pair of bedfellows. But is it really so strange?

Of course, the author, Andrew Freedman, thinks that Barack Obama is obliged to give a fiery alarmist speech to please the movement of the little green men like Freedman himself. Well, I am not 100% sure whether Freedman is the U.S. Überpresident who can control the U.S. President. ;-) 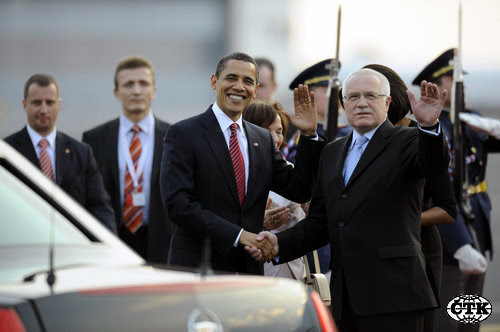 After their private conversations, President Klaus was pleasantly surprised by Obama's charm and energy. Climate realist Klaus noted that Obama has complained about his aids' and his environment's having no sense of economic reality when it comes to policies focusing on CO2. It sounded like the music from the heaven to Klaus's ears, he said.

I think that Freedman is right. Barack Obama has given a smaller space to the climate change in his speeches than George W. Bush did in the same stage of his presidency because Barack Obama is actually a climate crypto-realist. He is just surrounded by hordes of wrong, fearmongering people - and he has become a symbol of all their wrong plans. But at the very depth of his soul, he doesn't think that it's a good idea to regulate carbon. Am I wrong?


Freedman is also right that Marc Morano should be praised for his professionalization of the way how more balanced information about the climate is being effectively distributed over the Internet, among the U.S. lawmakers, and others. Thanks, MM.

But most importantly, it is Mother Nature who must be praised for being so flexible and changing yet so stable in the long run, for being so rich in the spectrum of phenomena that influence e.g. the climate, for allowing the carbon to circulate and for serving as a good role model for politicians in this respect, and for making the climate realists right.

What Barack Obama personally thinks may become somewhat important. On the other hand, all of us know that Barack Obama has often said things that would help him politically. He should realize that his actual opinions may matter. And even if he cares about the sustainability of his job, I think he would be crazy to strongly support the sinking ship of climate hysteria whose steersmen will have to be increasingly shrill and increasingly open about the fact that their ideology has always been based upon intimidation, lies, and brainwashing rather than solid science.

Mr Andrew Freedman, are you really so sure that Obama is going to join the losers like you? After all, unlike your job, the U.S. President's job doesn't strictly depend on spreading lies and keeping irrational fears alive. The experts actually say that the best time to sell a stock is when the hysteria surrounding it has reached its zenith. Maybe, we will never hear Obama paying homage to stupidities about a 5 °C warming and similar stuff again.
Luboš Motl v 7:47 AM
Share