The 2009 Chemistry Nobel Prize went to Venkatraman Ramakrishnan (Cambridge U.K., born in India), Thomas A. Steitz (Yale), and Ada E. Yonath (Weizmann, Israel) for studies of the structure and function of the ribosome. That could look like a biological discovery but the methods were pretty "chemical" or even "physical". 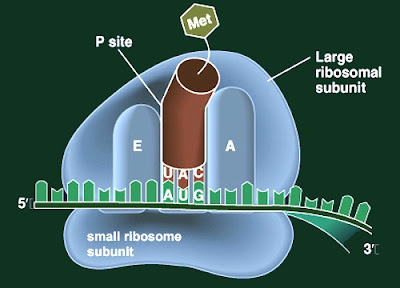 This picture doesn't directly describe the work of the winners but it may be good to be reminded what a ribosome does.

Crystallographer Dr Yonath whose victory was correctly predicted by some media broke the 45+ years when women receeived no physics or chemistry Nobel prize. Whether or not she was chosen purely by meritocratic criteria, there's one aspect you could have expected. By pure statistics, it shouldn't be too shocking for you to learn that the first woman to succeed in this way is Jewish. ;-)

An Ashkenazi Jew is 40 times more likely to receive the Fields medal than a random non-Jewish white: it may be similar for similar awards. Because there are about 10 million Ashkenazi Jews, you may see that their combined odds exceed those of the non-Jewish U.S. whites. ;-)


You know, in the Israeli-Iranian nuclear standoff, there's one consideration I view as important while most others don't. Who has the right to possess the nukes? Well, the Jewish scientists have contributed to the science that was needed for nuclear energy much more profoundly than the Persian scientists did.

So I find it completely logical and deserved that they can possess the weapons while Iran cannot. They can also be expected to act more wisely with this technology - something we have already checked in the most recent decades.

P.S. Ada Yonath seems to be of Sephardic origin, according to some sources. This group has the same IQ distribution as average Europeans. Because the group is rather small, you can see that my "typicality" argument above doesn't work.
Luboš Motl v 11:53 AM
Share