350 day: a failing struggle for an unattractive utopia

You may have not noticed but Saturday, October 24th, 2009 was an International Day of Climate Action: see 350.org & Google News.

Hundreds of people in the whole world organized events urging the world's CO2 concentration to return to 350 ppm (350 parts per million: 3.5 molecules out of 10,000 are CO2 molecules). Even in the Czech Republic, a dozen of activists gathered at the Old Town Square, emitting dozens of dirty black "CO2" latex balloons into the air.

(They also used masks of various well-known world politicians for a childish puppet show in which these politicians declare 350 ppm to be the new Copenhagen law.) 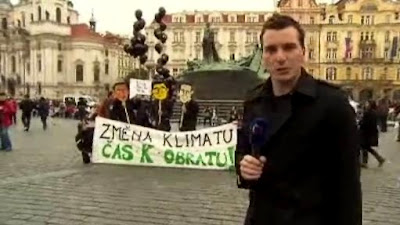 A few stupid hippies can easily get into the national TV news if they're on the "right side" (i.e. the far-left side) of the political correctness.

Twenty years ago when the CO2 concentration was at 350 ppm, the environmental activists would fight against things such as latex balloons in the air. They are polluting the environment and some animals may get into trouble when they swallow the balloon.


Today, they don't care. They decided that the CO2 concentration should be 350 ppm - instead of the correct current value, 388 ppm, shown by the world climate widget. (This figure, corresponding to the maximum of 2009, increases approximately by 1.8 ppm a year, and the annual difference between the maximum and minimum due to the seasons on the dominant Northern Hemisphere's lands is around 7 ppm.)

I think that they obtained the meaningless figure of 350 ppm from a pseudoscientist named James Hansen and his 8 collaborators. And because these little green men are mindless brainwashed sheep, they didn't manage to figure out that there is nothing special about 350 ppm: the figure was randomly picked by Hansen et al. in order to produce a new "slogan" for their movement.

Even Gavin Schmidt realizes - and was quoted in The New York Times as saying - that his boss Hansen's focus on 350 ppm completely misses the point. Of course, Schmidt was instantly attacked by RealClimate readers. Well, he helped to create (by brainwashing) thousands of such Frankensteins so he shouldn't be shocked if they kill him on a sunny day.

It's very obvious that there is no qualitative difference between 350 ppm and 388 ppm. And the doubled pre-industrial levels - concentrations near 560 ppm that we may reach sometime before 2100 - are not special, either. 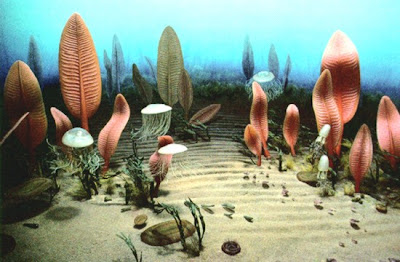 In proterozoic, half a billion years ago (you may think it is a long time ago but the Earth was just 10% younger than it is today), the concentration was around 4,500 ppm. That's 12 times the current value and it seems like a lot.

However, we could actually live there just fine (once we would realize how tasty the food from the picture above is). The unpleasant concentrations are much higher than 4,500 ppm.

Some people start to feel drowsy when the CO2 concentration reaches 10,000 ppm. Below 20,000 ppm, most people still can't notice the elevated concentrations. At 30,000 ppm, their breath speeds up: this is still a result of a deficit of oxygen rather than excess of CO2. Only above 50,000 ppm (5% of the air), CO2 becomes directly toxic.

And because 11.3 = 2^{3.5}, the multiplication of the CO2 concentration by 12 corresponds to roughly 3.5 CO2 doublings. Without feedbacks, one doubling adds 1.2 °C; 3.5 doublings correspond to 4 °C or so. We may discuss whether the net feedbacks are positive or negative: the article about geology calculated that the full warming from CO2 doubling is probably smaller than 1 °C. At any rate, it's clear that the most pronounced temperature variations in the Earth's history couldn't have been possibly caused by changes in CO2.

Related: The janitors and their friends in the London science museum have studied the evidence and decided that you should jump on the AGW bandwagon, too. You may tell them either to count you in or count you out.

And equally obviously, we will never reach anything like 4,500 ppm again, by burning of the fossil fuels and similar activities. Even if we managed to burn everything, the concentration would probably be kept below 1000 ppm at all times. That's a harmless concentration.

On the other hand, if we managed to stop all industrial activities, the CO2 concentration would begin to drop by 2 ppm a year, converging back to the equilibrium value dictated by the present temperature - around 280 ppm. Obviously, within a few centuries, the Earth will get rid of the excessive CO2 again.

But even if the people found some extremely efficient technology to lower the CO2 concentrations (e.g. new artificial, genetically engineered "trees" that "swallow" the gas very quickly), so that we could get back to 350 ppm within a few years, I don't think it would necessarily be a good idea to realize this plan. I am convinced that life in 388 ppm is better than life in 350 ppm.

A novel technology to reduce the CO2 would probably be cheaper than the "reduction schemes" by a few orders of magnitude. But it would still be too expensive to be realized - especially because the benefits of such a CO2 reduction would be negative.

Carbon dioxide. They call it pollution. We call it life.

By the way, on Friday, Barack Obama gave a radical 20-minute speech at the MIT in Cambridge, Massachusetts. He presented lots of fantasies about the new energy sources that will replace fossil fuels - he didn't specify any sensible hints what they could be - and he announced that the climate realists (or "naysayers", using Obama's words) are being successfully marginalized.

Well, I think that the 200 million climate deniers in the U.S. have already been marginalized as totally as possible, and their influence can only grow bigger from now. You're just on the losing side of the barricade, Barack, and your totalitarian self-confidence can't change it.

Lord Monckton has defended his remarks about the possible loss of the U.S. sovereignty in Copenhagen in a 75-minute Skype talk.

He has also said many interesting things about the CO2 climate sensitivity, good state of the environment, negligible effects of the observed warming, Gore's hypocritical purchase of the real estate, and the sociology of the green movement in general.
Luboš Motl v 8:48 AM
Share