Arnold Schwarzenegger has vetoed a bill about the funding of projects in the San Francisco area, proposed by an aggressive homosexual activist. That wouldn't be important enough a fact to be discussed at this blog. However: 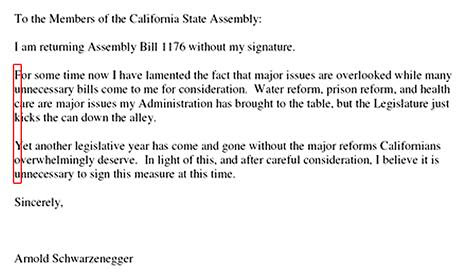 Unlike other texts, Schwarzenegger's veto must be read vertically to get the key message. ;-) Now, the governor's office claims that it is just a coincidence. How likely is it? Well, 26^7 is equal to 8 billion or so.

That's like a 7-sigma evidence against the "noise" explanation. :-) And who knows - maybe we should also count the spaces and/or the initial "I" before the verb :-) which would make the odds even more spectacular. Moreover, there exists additional, microscopic circumstantial evidence supporting the "intelligent design" explanation in this case.

"Kicking the can" sounds too poetic for a political memorandum (they needed a "k"), "overwhelmingly" seems redundant for describing how Californians deserve something (they needed an "o"), and the repeated occurrence of "unnecessary" (they needed a "u" twice) would probably be adjusted away if the good style mattered more than the vertical message.


Arnold Schwarzenegger is pretty creative although we could have doubts whether he has created the letter himself. Good sense of humor.

The message could have been made excessively contrived, too. The end of the letter, from "Sincerely", could have said "Respectfully [newline] Arnold [newline] Schwarzenegger [newline] Sincerely". (Be sure that I could give a smoother solution to this problem, but this simple one is OK as a proof of a concept.)

Then the hidden vertical message would be much longer - "I *u** your *s*." That would bring us to 10-sigma evidence against noise.
Luboš Motl v 11:52 AM
Share