A few weeks ago, the British government aired an outrageous commercial with "drowning pets" on TV. Hundreds of viewers have complained. The great news is that the narration has been corrected. Here is the fixed version of the commercial:

If the video above doesn't work for you, view it at YouTube.COM (they may have banned embedding).

The Minnesotans for Global Warming who helped to cure the errors want you to sign a petition against cap and trade, to be sent to Obama.

This year, I will not annoy the global TRF readers by provincial things such as the 91st anniversary of the birth of Czechoslovakia which remains the most important Czech national holiday: the blog would become too periodic if these things were repeated all the time. But I can still encourage some readers to play this Czech anthem, namely its four "Topolánek" 2008 editions with my video.

In the summer, the TRF readers were told that the middle of July 2009 has seen the warmest days of the UAH record, as measured by the absolute temperatures (rather than anomalies). 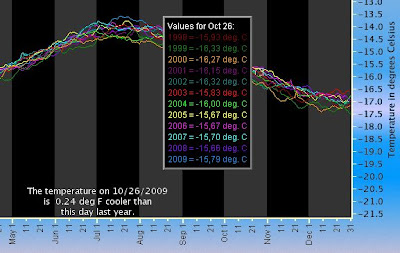 However, such a situation didn't imply that we would be seeing the warmest days forever. In fact, if you check the daily UAH temperatures and click at "Draw graph" (Java needed), you will see that October 26th, 2009 was the coldest October 26th since 2004, despite the El Nino that is underway.

In fact, the El Nino index is currently at the highest positive value at least since 2004, and that should imply a warmer weather (although, perhaps, with some delays). The reality is that the days we experience are among the cooler days for the season.
Luboš Motl v 9:54 AM
Share