Czech Constitutional Court looks at the Treaty of Lisbon

The proceedings began at 10 am, Central European Time. The boss of the Constitutional Court, Dr Rychetský, enumerated the participants of the proceedings. Pretty much all of them were "personally known" to the court.

Dr Pavel Rychetský, a former social democrat, the boss of the Constitutional Court in Brno.

Only the lawyer of the plaintiffs had to be chosen from two possibilities. Consequently, Dr Rychetský asked Dr Kuba, who was selected by the plaintiffs, to present his ID to the court. Yes, this is indeed Dr Kuba - and his license numbers were made public. ;-)

The revenge didn't have to wait for too long. Dr Rychetský asked whether anyone in the room would submit a complaint that the court is prejudiced.

Dr Kuba immediately and politely answered Yes, we think that the very chairman Dr Rychetský is biased, and he gave the court a lot of coordinates for paragraphs. And as evidence, he quoted Lidové noviny, a leading newspaper, that informed that Johannes Haindl, the German ambassador, met Dr Rychetský and asked him how much time it would take for the court to release the verdict.

The proceedings were interrupted for 10 minutes - for all the judges to determine what to do with the complaint against the chairman. ;-) Of course, Dr Rychetský was not eliminated but he has been visibly shatterd, with his face getting much more red. It's conceivable that a judge (or judges) argued or voted against Dr Rychetský.

Dr Rychetský continued and nicely explained the content of the complaint - see Why Lisbon is inconstitutional for a similar summary. 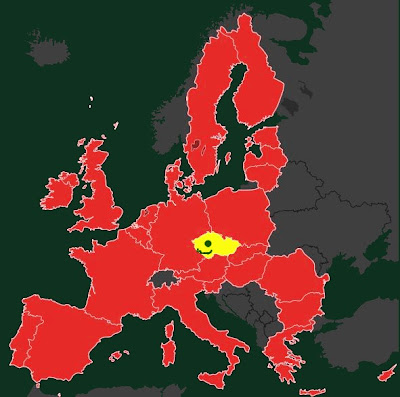 The Senators' appendix contains a proposed verdict, describing dozens of pairs of paragraphs (from the treaties - Rome, Maastricht, Lisbon - and from the Czech constitution) that contradict one another. :-)

President Klaus, represented by a polite lawyer, clarified the content of Klaus's latest testimonies. He presented Klaus's questions for the court (whether Czechia will remain sovereign, and EU remains an international organization etc). Dr Rychetský informed him that while the Czechoslovak constitutional court was expected to answer questions, the Czech constitutional court is no longer legally expected to provide plaintiffs with any interpretational answers.

Mr Füle, the EU affairs minister of the technocratic government, stood up and wanted to make his final speech. Dr Rychetský interrupted him and informed him, as a newbie, that it was not yet the right time for the final speech. :-) At 11:30 am, they adjourned, to continue at 1:30 pm.

In the afternoon, Mr Jiří Oberfalzer, the main Senator representing the plaintiffs, reiterated the problems they see in the Treaty of Lisbon. Some other participants told their ideas about the situation, too. Before 3 pm, the proceedings were adjourned to next Tuesday, November 3rd.

As I expected, the EU summit on Thursday and Friday will have to work without the ratified treaty. President Klaus won't participate at this summit of the EU Big Cheeses but his office's head, Mr Jiří Weigl, actually will.

By the way, Reuters informs that Europe's highest court in Luxembourg decided that Austrian courts have no right to decide about the closure of Czech nuclear power plant in Temelín (which can only be sued for actual damages if they ever occurred).

While this verdict is pretty obvious, the very fact that the EU court had to be deciding about such an issue shows that the creeping EU integration may undermine the sovereignty of individual countries and threaten things that we could once rely upon - similar to the (so far valid) opinion that the medieval Austrian anti-nuclear activists are just irrelevant puppets with no power.
Luboš Motl v 10:18 AM
Share