Die Welt: 65% of Germans think that Lisbon is bad 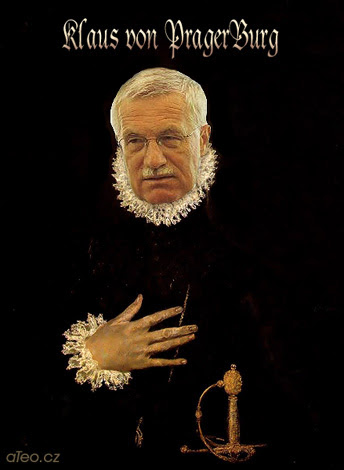 The number of articles found by Google News that talk about Václav Klaus has jumped from the typical figure around 400 to 2,000 in the last month. I suspect that regardless of the issues, the Czech president enjoys the surge. ;-)

The Times as well as Die Welt have informed their readers about rumors describing Klaus's explicit - although not quite public - pledges that he wouldn't ever sign the treaty. And it's obvious that there can hypothetically exist "counter-weapons" of the pro-Lisbon side that would make Klaus sign the document. No one can be sure what is going to happen.


Well, I don't know how reliable their sources are - probably less reliable than your humble correspondent would be. At any rate, it is very obvious that the president is going to do whatever is realistic to kill the treaty. It is equally obvious that his powers are not unlimited.

Bonus joke for Klaus opponents and for the fans who like jokes as well: God invites Obama, Putin, and Klaus to His house. "I invited you because I consider you to be the three most important people on the planet. I need to tell you that in 10 days, the end of the world will arrive. Please, inform your citizens."

Obama immediately speaks in the Congress and says: "I have two news for you, one is good and one is bad. The good news is that God exists - I spoke to Him a moment ago. The bad news is that the end of the world is coming."

Putin calls the Russian State Duma and says: "I have two bad news. God exists - I just spoke to Him. And the other bad news is that the end of the world is here in 10 days."

Václav Klaus organizes a press conference at the Prague Castle and says: "I have two good news for you. First, I belong among the three most important people in the world. Second, the Treaty of Lisbon won't be signed." :-)

The article in "Die Welt" includes a poll: Is Lisbon good; partly good, partly bad; or bad? 65% of the German-speaking readers think that the treaty is bad and only 21% think it is good. And most of the comments in the discussion under the article consider Klaus to be the savior of Europe from a creeping dictatorship.

Let me be clear once again. As I have indicated, I have no doubt that the topic of the Beneš decrees has been chosen by Klaus not because it is really the most important topic right now but because it seems to be the most efficient tool to fight against the treaty.

The Czech lands have been betrayed by their allies in the past. In Munich, our French and British allies were negotiating with Hitler and Mussolini - "about us but without us", as the Czech history teachers often say. France and Britain cared about their short-term safety rather than the long-term interests of their allies and of the community of the democratic nations. And they didn't calculate the future properly. Meanwhile, the war began and ended and we ended up among the winners - which was not guaranteed from the beginning. So all the British and French readers should know that all their great grandfathers' sins from the late 1930s have been largely forgotten and we remember the French and especially the British as our allies in the most recent world war.

Except for the very old generation, there are no anti-German feelings in Czechia, either. A thick line has separated our present from the old emotions. The nations have declared that all the debts and sins from both sides have been compensated. They have agreed that the "status quo" is fair which made the problem-free relations possible.

But the Munich treaty - and a few similar stories in the past - did teach us something. The Czechs don't plan to say that "someone is owing us something" - these things really belong to the history - but the historical event tells us what we must be careful about in the future. It would be downright silly not to learn anything. We must be careful with such treaties. The larger European countries will care about their interests rather than ours. It's very clear that we must be doing the same thing.

While Klaus's official job is to defend the rights and interests of the Czech citizens (rather than all EU citizens), the interests include the people's life in freedom which is not crippled by a Big Brother in the capital city - a desire that is shared by a huge portion of EU citizens. So hundreds of millions of people outside Czechia realize that Klaus is fighting for their better future, too. And others have a different opinion, of course.

Let me stress once again that the current Czech-German relations are very good - and they are very good because of many people including Václav Klaus himself.

Czechs are sometimes nicknamed the "Germans among the Slavs". In some sense, we do understand each other. German entrepreneurs are able to do business in Czechia well. Economically, Czechia is largely integrated to Europe. It is a very open economy and the trade with Germany dominates. From this viewpoint, you should imagine Czechia to be a part of the German economic space rather than a part of a poor Eastern Europe.

On the other hand, the Germans - and everyone else - surely do understand that no one in the Czech Republic wants to be at risk of losing his house in the Sudetenland. They didn't like the idea, either. And we also understand why they didn't like it.

On the other hand, there was a damn good reason why they lost the houses 64 years ago: the German Empire they were mostly supporting used to have unforgivably ambitious plans, to put it euphemistically. But they have lost the war. And such losses have their consequences. On the other hand, the only reason why something similar would be happening today would be a screwed signature under a treaty that would allow some non-Czech courts to decide about some very distant history, without taking the laws linked to the World War II results - including the Beneš decrees - into account.

(Germans would probably also understand that the Czechs wouldn't be happy if someone were forcing them to speak German or something like that: just imagine the same possibility in the opposite direction.)

Once again, it is true that the issues of the expelled Germans is just a particular trick for Klaus to guarantee that he is going to be supported by the Czech public - and be sure that 90% of the citizens do support him in this context. That gives him the legitimacy he needs to act on behalf of the whole nation.

While the Czech Parliament has okayed the treaty, everyone knows that it was under some pressure and the argument that "our EU friends want us to sign" was by far the most dominant argument in favor of "Yes": pretty much all the genuine arguments about the treaty's content were arguments supporting the "No" answer. And the approval rate for the Parliament - 28% - is so much smaller than that of Klaus - 70% - that no politician with plans to be successful in the 2010 elections can afford to directly attack Klaus on this point even if he happened to genuinely disagree with Klaus.

The idea that Klaus is standing "against his nation" is downright childish.

Moreover, Klaus is the most legitimate Czech political institution because of another reason: the mandate of the caretaker government is limited because this government is always supposed to be just a temporary solution without the full political power, a fragile apolitical compromise between the parties in the Parliament. It couldn't have been surprising that the only possible approach by prime minister Fischer - who probably wants Lisbon to be approved - was to try to satisfy Klaus's wishes.

And indeed, Klaus is unlikely to promise that he would sign the treaty after they negotiate X or Y. His goal is to kill the treaty rather than X or Y. I think that this topic has been discussed for long enough a time for all the people who are interested to start to understand this not-so-subtle point. ;-)

What Barroso et al. are doing so far seems ludicrous. We are constantly reading about "pressure" that is "piling up". So far, I haven't seen any pressure whatsoever. The threats that Barroso et al. have produced may be enough to change the mind of their peers - mindless sheep who never have their own opinion and who are completely manipulated by the political wind around them because 100% of their political strategy is to "going with the wind as accurately as they can". But it's surely not enough to influence Klaus.

To change Klaus's mind, they obviously need to offer him - and the Czech nation - something positive in the case that the president is going to ratify the treaty. They have to find a "weakness" of him. Whether there will be a Czech EU commissioner in the next commission is an irrelevant question: it's not his weakness or something he cares about.

Indeed, there exists a "risk" that the time needed to satisfy Klaus will be long enough for Cameron to win the elections and prescribe a U.K. referendum about the Lisbon Treaty. But the EU officials have no choice. If they really want their feeding troughs to deepen, as envisioned by the Treaty of Lisbon, they have to do what is always needed to make the other side sign a treaty: to negotiate with it.

It's very clear that if they managed to satisfy the demands that Klaus has said so far, his political capital to demand additional things would be vastly reduced. In principle, this may happen before the U.K. elections.

But their expressed emotions - their indication how much they have been looking forward to their deeper and bigger feeding troughs prescribed by Lisbon - makes no political impact on the situation whatsoever. It's cute (and unsurprising) that they want to be more powerful and to "more efficiently" decide about the European citizens without the citizens' being able to do anything against it. But it's surely not an argument for Klaus to sign.

So my message for the EU politicians is: stop acting like clowns, like Napoleon or Adolf Hitler. You don't have the Luftwaffe or the mandate to use it and this fact makes a difference. You only have the political mandate you have. The rules of the game are very clear. The Treaty of Lisbon needs 27 states to sign. The number is not yet 27 and the reason is no "error of the measurement".

Subsidies (less than 1% of the GDP), missing Czech commissioners, and other things are irrelevant and negligible, too. And the normal trade (and similar relations) between Czechia and other EU countries exists because it is good for both sides. You can't possibly gain anything by trying to question these things. You know, treaties usually have two (or several) equal partners. All of them must gain for the treaty to be subscribed. The case of Lisbon is no exception.

Barroso says that the situation - and the proposal to amend the treaty - is "absurd" and "surreal". Well, it means that he cannot imagine that the real world works like this. He apparently has no idea what to do now. Well, the situation is certainly very real and if he doesn't know what to do in pretty normal - and more than expected - political situations, he should quit politics because he is simply not capable to work in it.

If it is "absurd" for him and other EU politicians to do what is normally done whenever two sides want to sign a treaty - to negotiate - I can only say that in this case, it is "absurd" for the Treaty of Lisbon to ever become valid.
Luboš Motl v 12:14 PM
Share