Today, a two-day summit of the European Union begins in Brussels. It will be mostly discussing two things - none of which will be present in Belgium:

Moreover, you can see that the two main topics are opposite to one another. ;-) 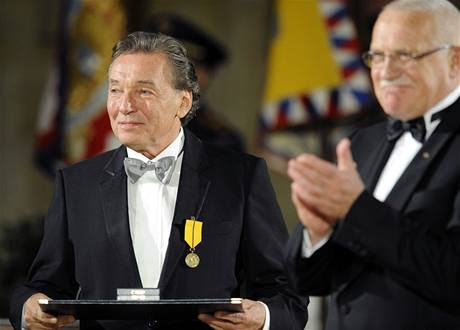 Yesterday, in the evening of the most important Czech national holiday, Klaus gave the highest awards to Karel Gott and 22 other personalities. For Gott, that's far from the first award of this kind. Gott has famously identified Mr Gustáv Husák, the last communist president, as a nice chap. ;-) See also Klaus's holiday speech in which he urged the Czechs not to surrender to political correctness, among other things.

Václav Klaus has apparently told Czech prime minister Mr Jan Fischer that if the Czech Republic is exempted from the EU Charter of Fundamental Rights - and if the constitutional court says that the Treaty of Lisbon is OK (next Tuesday?), he will sign the treaty. Czechia would simply join Poland and Britain that have received the opt-out for different reasons (the right to ban gay marriages and the protection of the English judicial system).


I think that the declared reason of the opt-out is not terribly important, except for visual effects. After all, the countries are exempted from all the regulations in this charter.

However, things will probably not be quite smooth. Various officials in Austria and Hungary have declared their determination to veto any concessions to the Czech Republic (Slovakia decided that it won't demand any further concessions, after all). The Hungarian PM thinks that any exemption for Czechia would be dangerous while the same exemption is OK for Poland and Britain. ;-)

Some Sudeten German activists have asked Angela Merkel to veto the demands, too. These Germans have an amusing ally: the Czech labor unions that want the Charter of Fundamental Rights to be valid for them because it contains a lot of new socialist tools for them to get money for being freeloaders - which is actually one of the main purposes of this far-left document.

The particular list of the nations in the previous paragraphs does indicate that the issue of the opt-out has some real or at least widely perceived relationships with the Beneš decrees that allowed the post-war Czechoslovakia to efficiently punish the wrongdoings of a large part of its former citizens.

Of course, I think it is pretty much clear that President Klaus actually wants these governments that, in this context, mostly represent the interests of the formerly Nazi families to insist on their opposition to the Czech opt-out because that will enhance the chance that the whole Lisbon train will be stopped at the end. Please, don't tell them. ;-)

Despite the uncertainties about the fate of the Treaty of Lisbon, some people are already struggling to become the EU president, a seat defined by the treaty. Finally, the people are forced to understand that the idea that such seats are filled by "complete consensus" are utterly absurd. Different candidates and their countries promote very diverse - but almost universally stupid - criteria what the EU president and his nationality should satisfy. A lot of trade-offs and concessions will have to be made if the EU president is ever chosen.

This funny video shows how the dinner dedicated to Klaus tonight should look like in Sarkozy's dreams. ;-) However, Klaus doesn't attend, and if he did, he would surely not be as submissive as the French video indicates. :-)

However, as E15 and others mention, the European Union already has its president. His name is Václav Klaus. David Klimeš explains how skillfully Václav Klaus can control the generic EU politicians as puppets who play in his show. He may continue to be the principal for quite some time.

Thursday evening, update: the EU leaders have agreed to give the Czech Republic an opt-out from the Charter of Rights (the opposition has evaporated) - and Klaus seems satisfied. So I am afraid that if the constitutional court okays it again, and it probably will, Klaus will unfortunately sign the treaty. Its impact on Czechia has been reduced by a significant amount but it's still a bad thing. 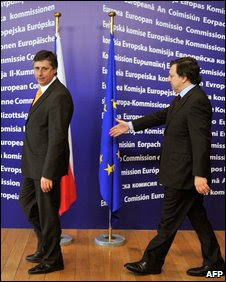 Jose Barroso forgot the difference between the front side and rear side of Czech PM Jan Fischer and tried to shake his hand from the wrong direction.

Climate lunacy at the EU level

The summit will also discuss the question how many dozens of billions of euro a year should be splashed into the toilet just for the "climate aid to the third world". No harmony can be expected on this front, either. See Luxembourg EU climate talks collapse.

By the way, if you remember the poll of the London Science Museum (count me in, count me out), there were about 4,000 votes "counted in" just a few days ago, almost matching the number of skeptics. However, the museum has admitted that 80% of these "Yes" votes were manifestly fraudulent, so only 800 votes that have not yet been proven to be fraudulent are "counted in".