Last time we talked about the Fermi satellite, formerly known as GLAST, it just ruled out all natural Lorentz-violating theories.

The Fermi haze: A gamma-ray counterpart to the microwave haze (PDF)Sky and Telescope (summary)

brings us new exciting results about yet another hot issue in fundamental physics: the character of dark matter.

Let me assume that the distinguished reader has been convinced that dark matter almost certainly exists - so the question is not whether it exists but what it is made out of and how this new kind of matter behaves. 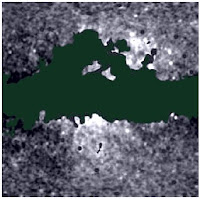 In its microwave spectrum, the WMAP satellite saw a "haze" coming from electrons near the galactic center back in 2003 (at least Douglas Finkbeiner claimed that it did: see the picture on the left) - and there were always good reasons to think that these electrons could be created by dark matter annihilation which would be exciting if true.

The Fermi satellite is looking at the situation in much higher a frequency segment of the electromagnetic spectrum - well, it employs the gamma rays. After they subtract the photons from decaying neutral pions and the brehmsstrahlung from the soft-synchrotron radiation, they still see some pretty hard, excess gamma rays.

Nevertheless, the authors of the paper claim that the location and distribution of the electrons responsible for these hard excessive photons - electrons apparently participating in inverse Compton scattering (ICS) - matches the prediction made from the dark-matter interpretation of the WMAP haze.

So the attractive story is that near the galactic center, the dark matter particles annihilate in pairs and create electrons which produce the additional gamma rays observed by Fermi (as well as other signals). 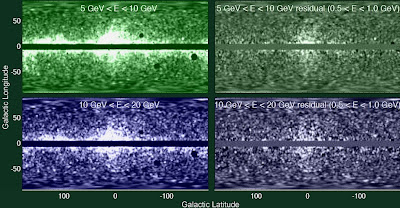 There also exist other reasons why this signal could be unrelated to dark matter, after all. There is a lot of uncertainty about the right interpretation. But the multiplicity of the stories - WMAP, Fermi, PAMELA, ATIC - kind of increases the subjective likelihood that the dark matter annihilation is actually being observed by all of them (or most of them).


Note that in the most acceptable model, the dark matter is composed out of neutralinos which are their own antiparticles. So they can annihilate in pairs. The required rate of annihilation - to explain the "haze" data of all kinds - is significantly higher than expected from the simplest SUSY models. A new interaction between the dark matter particles is believed by some people to amplify the annihilation rate.

The preprint contains a lot of URLs where you can download all the required data from Fermi.
Luboš Motl v 6:34 PM
Share