Ireland surrenders. What will Klaus do? 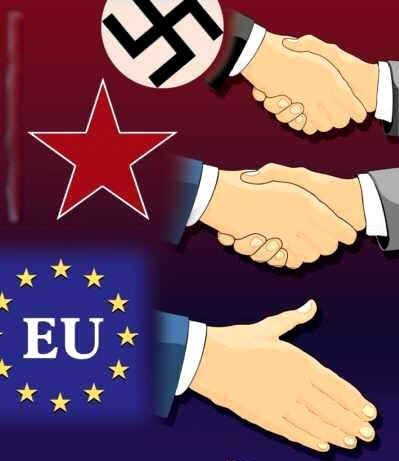 The Irish voters have "corrected" their past "mistake".

After 15 months of brutal brainwashing, intimidation, lies, and "guarantees" that don't have the price of the paper on which they're written (because they were not ratified as additional international treaties in the member states), approximately 2/3 of the Irish voters have endorsed the Treaty of Lisbon. The Vatican that encouraged them to vote No couldn't change the result. The only regions where "Yes" lost in 2009 were both Donegals - the part of Ireland that would naturally join Northern Ireland if geography were the only issue.

The Polish president has promised to sign the treaty within days after the Irish "Yes".

On the other hand, Czech President Václav Klaus was informed by the Constitutional Court that he is not allowed to sign the treaty until the court decides about the complaint by 17 senators that the treaty is unconstitutional. Fortunately, at least Jose Barroso realizes that the Czech constitutional procedures have to be respected.

Of course, Klaus wisely use the ban today and said that he can't say anything about his future plans: the question doesn't exist today. Waiting is playing on his side, especially because the eagerness of the Lisbon supporters will die away in a few weeks.


And even if we imagine that the court says - maybe as early as at the end of October or in November - that the treaty is constitutional (which it's not), Klaus will have to think hard.

He has argued, in front of the constitutional court, that the treaty was unconstitutional. And when he was elected, he has pledged that he would protect the constitution (and sovereignty) of the Czech Republic. He genuinely believes in this task of him. These things should imply that he shouldn't sign the document.

On the other hand, today he complained that the Britons weren't faster to act against the treaty: it may be too late today. And previously, Klaus has revealed that if he were the "very last man in Europe" who doesn't want the document, he wouldn't spoil the party. Well, he's surely not quite the "last man". A rally - including some smaller political parties and the mayor of Prague (Pavel Bém of Mt Everest) - is just marching to the Prague Castle, to encourage Klaus not to sign it. Of course that the future developments can't be quite predicted and we can't exactly know what Klaus meant by the "last man" and how much he's able to resist. 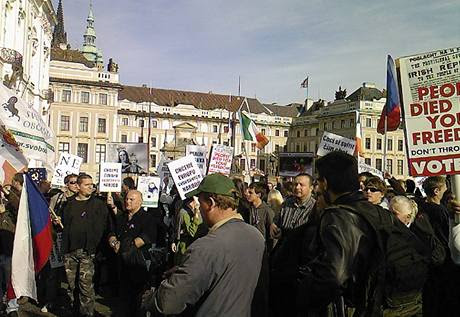 300 people arrived to the Castle today to discourage Klaus from signing the treaty. Klaus thanked the participants and told them that if the Irish had voted differently, they would have to repair the vote again, for the 3rd, 4th, or 50th time. Because they voted "Yes", there won't ever be another Lisbon referendum in Europe after the Irish one: they used their last chance to speak up.

BTW, most readers at aktualne.centrum.cz and tn.nova.cz (40:60) disapprove the Treaty of Lisbon. Also, 68% of visitors to tn.nova.cz predict that Klaus won't sign the treaty.

But I think that a huge majority of the Western pundits heavily underestimate how important a topic this is for Klaus, and how powerful, skillful, creative, educated, and stubborn a politician he is. You know, it's a personality with 20 years of mostly victorious political experience, bright intellect, and unlimited self-confidence who makes the likes of Merkel and Sarkozy pathetic clowns and amateurs in comparison. The fact that most of Europe still fails to realize who Klaus is only emphasizes how isolated the national political environments of the EU are.

Last time (except for 1968) when the Czech lands were forced to enter a pan-European empire as a province, the acting Czecho-Slovak president was invited to Berlin - the same place where the Lisbon Treaty was masterminded. Our president was psychologically tortured for hours. He was threatened that Prague would be bombed by Luftwaffe. He ultimately suffered from a heart attack and signed the surrender.

That was in March 1939 and you should know the name of Angela Merkel's famous predecessor who invited him. ;-)

I don't know whether Luftwaffe is stronger - and more willing - to bomb Prague these days. But I am sure that Klaus's cardiovascular system is in a much better condition than Emil Hácha's! (That was the name of our ex-president who was "destroyed" in this way: by the way, this lawyer was a very sensible guy and the translator of Jerome Klapka Jerome's books.) It is conceivable that if Klaus were the leader at that time, he would beat Hitler on this diplomatic arena in some way that I cannot quite re-invent at this moment. ;-)

The EU is surely not quite the same thing as the German Empire of the late 1930s but the Lisbon Treaty would transform it into something very similar to the Soviet Union. I have spent some time reading the text,


and some portions are just horrible. The treaty contains a lot of left-wing propaganda that could belong to the programs of mostly leftist political parties but that are simply disgraceful in the constitution. Because we've had the "leading role of the communist party" prescribed in the constitution until 1989, we may perhaps know something about where such "principles" typically lead.


Can you imagine that? The constitution - and this is its (renamed) EU counterpart - should normally contain the "holy" rules that everyone should hold dear. But this one codifies the global warming propaganda.

Also, given the fact that only imbeciles think that the "precautionary principle" is a rational approach to decision-making, the treaty implicitly says that all EU officials must forever be imbeciles. Will it become illegal for officials or even ordinary citizens to say that global warming is idiocy - because it would contradict the basic laws of the EU? And be sure that international treaties (or EU constitutions) are legally above all the national laws.

To be sure, the treaty also prescribes the opposite of the precautionary principle - the costs-and-benefits analysis where the costs of action are compared with the costs of inaction. So much for its internal consistency.

I could continue. There are 480 pages of similar stuff. It's just terrifying. In my opinion, if this treaty ever becomes valid, we should try to leave the EU because many of these features are over the edge and the EU would become a net negative for us and for our democracy (and I surely think that it has been a net positive so far!). But I am not so sure whether it would be feasible to ever leave the EU again. And indeed, it's damn important for me not to spend the following 40 years in a new totalitarian system.

So I hope that Klaus will find the courage to resist. His resistance won't depend on other nations. But it could just happen that the U.K. elections that should take place in the early June 2010 or earlier (and they could be followed by the U.K. referendum about the treaty) could help him to resist, assuming that he will remain the last politician in the EU who represents the opinions and values of roughly 50% of the European population.

The inner working of the EU, as seen today and especially as envisioned by the Treaty of Lisbon, is simply not democracy. The EU Parliament has no opposition and it probably isn't allowed to have one. The names of "EU presidents" (Tony Blair) are suddenly emerging from "somewhere" - when most EU citizens (and whole nations) couldn't have discussed this issue or say anything about it at all.

Random political goals, most of which are pretty much guaranteed to be misguided, are filling the treaty. Clearly, such a treaty with so many random ideas would have to be amended all the time if Europe were supposed to survive.

This is about the evaporating democracy about the EU. But I do care about the national aspects, too. I kind of like Tony Blair (he would be surely followed by worse individuals) but I simply can't imagine how I could view him as the president of my "broader country". He's a 100% foreign politician. He is as foreign a politician for me as Barack Obama is.

He has almost certainly no idea about the political questions that are important in the Czech Republic and we know next to nothing about his real character, besides the diplomatic platitudes. If you assume that the U.K. Conservatives will win, he simply can't become more powerful than David Cameron because that would contradict all logic of democracy I can imagine. This arrangement simply makes no sense.

It must be stopped. If Klaus will have to negotiate defense of Prague against Luftwaffe with Putin, I give him green light to do so. ;-) After all, this is what should have been done with Stalin in 1939, anyway.

Of course, these projections are meant as jokes. Your humble correspondent, much like most Czech analysts, don't expect any "horror" once Czechia kills the treaty, assuming that it will. Our influence will still correspond to our population, the diplomats will face a few disadvantages in the EU, but we will of course remain members that is being talked to, they say.

P.S. Many people have reacted. For example, the co-leader of Marxists and greens of the whole EU, Daniel Cohn-Bendit, said the following:

On several occasions certain kids would open my fly and start to stroke me. I reacted differently according to circumstances, but their desire posed a problem for me. I asked them: 'Why don't you play together? Why have you chosen me, and not the other kids?' But if they insisted, I caressed them still.

Oh, apologies for a small error. I meant a different quote by this typical green politician:

This paves the way to securing the treaty that an EU of 27 member states needs, if it is to be better equipped to face these current times of global crisis. Only the Czech President Vaclav Klaus is persisting in blocking this process. Europe must now exert pressure on him to give up his twisted policy of obstruction. The Lisbon Treaty strengthens democracy in Europe.

He also threatened by the elimination of the Czech commissioner in the EU. The current commissioner, Mr Vladimír Špidla, also expressed his opinion:

I think that the president doesn't act in agreement with his constitutional responsibilities. You know, I have a good job in the European Commission. It is the most well-paid job in Czech politics, I don't have to do anything, and I want to keep the job for additional five years. People keep on asking me: What about this Klaus of yours? And I tell them: I don't speak English.