What is the ideal age for a jockey to win a horse race? Well, why don't you make a measurement by watching the 119th Velká Pardubická (Great Pardubice) Steeple Chase? 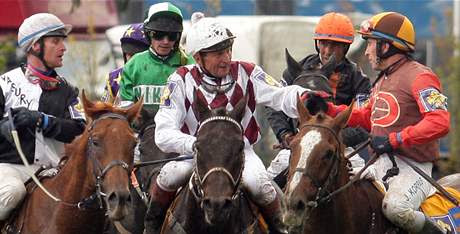 Josef Váňa is in the middle.

Yesterday, Mr Josef Váňa told his competitors that the only way to get rid of him was to shoot him. And he was damn right!

The familiar race in Pardubice, a town in Eastern Bohemia, was won by Mr Josef Váňa with horse Tiumen. The jockey will celebrate his 57th birthday in less than two weeks. It's his 6th victory in this steeple chase which brings his legend status to a brand new level. After President Klaus shared his compliments (and the cup) with Váňa right after the race, the jockey challenged the president for a tennis match. I would love to see it! :-)

At any rate: Congratulations. ;-)


The record high number of 18 horses managed to complete the race this year.

On Saturday, Poland and Czechia split their ways when the Polish president signed the Treaty of Lisbon. Who is right, Kaczynski or Klaus? So far, Klaus seems to be unaffected by what some of the EU officials and journalists consider to be a "pressure". ;-) To settle the question which president was right, there was a soccer match in the evening.

Last night, the Czech national soccer team managed to beat Poland, 2 to 0, in Prague. Several Polish fans had to be arrested. Despite the victory, the chances of the Czech team to qualify for the championship in South Africa dropped to infinitesimal levels.

Why? Because in another Saturday Slavic civil war, Slovakia (the likely winner of the group) lost to Slovenia in Bratislava, also 2 to 0, and Slovenia is likely to become Slovakia's companion from the group, ahead of Czechia.

Unless a series of miracles occurs, Czechia wins next week, and Slovenia loses to ... San Marino which seems somewhat unlikely given San Marino's persistent score of zero. And the score would have to work beautifully for the Czechs, too.
Luboš Motl v 6:42 PM
Share