Two years ago, Viktor Kožený, a well-known Czech financier (and inventor!) living on the Bahamas, sent a proposal to create minuscule nuclear centrifuges, besides other nuclear technology, to your humble correspondent and others.

Many of us were laughing. 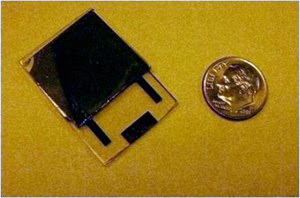 But I was reminded today that something remotely similar is being realized by researchers in Missouri. Their paper was rated as outstanding at a July 2009 conference. Radioisotope batteries can give you 100,000 times greater power than the chemical ones. These powerful ones are somewhat dangerous but you can create safe ones, with 1 Watt of power, that can last for a decade: see the picture above.

The semiconductors around them have to be liquid rather than solid, in order for their structure to be immune against the decay products. Why it's not as unsafe as the adjective "nuclear" instinctively leads most people to believe, and what are the other issues can be read at

Today, you may be disgusted by such gadgets, but in a few years, they may be inside most small devices that people will use. Jae Kwon, the main researcher behind the technology, plans to make the batteries thinner than a human hair in the future. ;-)


Assuming that people won't shrink this much themselves, I doubt that this much perfectionism will be needed. :-)
Luboš Motl v 3:02 PM
Share